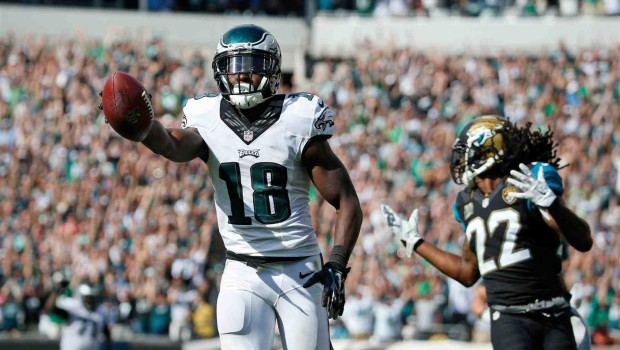 HOW THE MACLIN 68-YARD TD SPARKED THE EAGLES’ COMEBACK

A massive pall — gloom and doom for those of who don’t know — was cast over Eagles Nation at about 2:15 p.m. yesterday.

The Jacksonville Jaguars shut out the Eagles in the first half. But the game shifted after halftime, as Darren Sproles and LeSean McCoy sprung a few plays, and, crucially, Eagles quarterback Nick Foles appeared to simply decide to stop sucking.

It was a bad start. Philly’s first two drives of the season both ended with Foles fumbles—no one expected him to maintain the pace that saw him turn the ball over just four times last year, but these weren’t unlucky fumbles. On the first, Foles took the snap and stared down the left side, pump-faked left—or maybe pulled the ball down after having looked all the coverage right into his first read—and then he was out of time, losing the ball as he was sacked by the rusher coming from his left.

The second was more of the same: Foles dawdled, the pocket collapsed, and the ball was swatted to the ground. These are turnovers of indecision, Foles finding out that in an offense that creates its advantages through speed and pace, stuttering will get you flattened.

Meanwhile, Chad Henne and Allen Hurns were play-acting as the hottest new QB-WR connection, nudging Jacksonville out to a 14-0 lead. A field goal by Josh Scobee made the halftime score 17-0. A team that’s been talking Super Bowl, down 17-0 at the half, at home, against the Jaguars. You can guess what it sounded like in the Linc after that.

At one point, Mark Sanchez was warming up on the sideline, putting his helmet was on and everything. (The official line was that Foles had “hurt his hand.”) Foles stayed in for the second half, and if he didn’t do enough to make the Philly fans forget that miserable first half, it was enough to turn the game.

On Philly’s first drive, Darren Sproles had a 49-yard rushing touchdown on a 4th-and-1; the Eagles defense forced three 3-and-outs in the third quarter; and Foles regained confidence with short, quicker passes. All of a sudden, the ball wasn’t stuck to Foles’s hand for as long as it took a defender to jar it loose.

Doses of Sproles and LeSean McCoy wore down the Jaguars, and all of this bled together when the Eagles took their first lead with a beautiful play-action to an obscenely wide open Jeremy Maclin for a 68-yard touchdown. Out of the shotgun, the Foles fake to McCoy was sold hard as the entire line dove left, Foles slipped out right on a sort-of half-bootleg, and McCoy sealed the last rusher just long enough for Foles to sail the ball far enough for Maclin to catch it more or less in stride and walk the touchdown.

It was a perfectly executed play, and one that could have fallen apart in about eight different steps—the sell, the route, the blocking, and Foles not taking the pump fake you’ll see quarterbacks take when they have a receiver turned loose like that down the field. If he had, it would have been a third strip sack, and the Eagles might have been right back in the hole. Instead, the comeback was on.

The rest played to part: Chad Henne turned back into Chad Henne, and order was restored as the Eagles won 34-17. Foles finished with 322 yards and two touchdown passes.