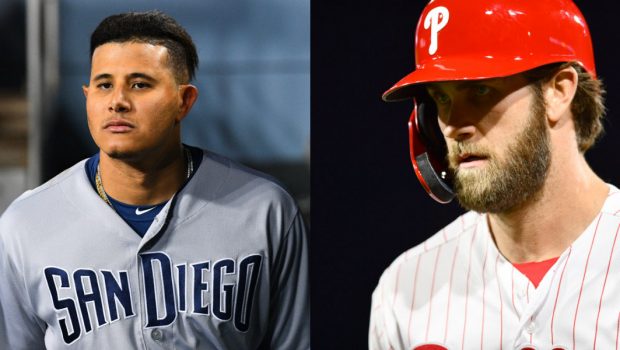 MACHADO SLAMS AND NOLA TANKS IN PADS’ WIN OVER PHILS!

Manny Machado’s grand slam carried the San Diego Padres to an 8-2 victory against the NL East-leading Phillies in the first showdown between the superstars who changed teams during spring training.

Machado’s two-out slam off JD Hammer highlighted the seven-run sixth. After rookie Josh Naylor hit a two-run single to knock out Nola (6-1), Hammer came on and walked Greg Garcia to load the bases. He struck out Franmil Reyes before Machado drove the next pitch for his ninth career slam.

Machado said he didn’t get a chance to speak with Harper before the game.

“I think he was getting ready and I was. It’s always good to find a new home. He found one and I found one myself. That’s the most excitement that we could get, knowing that we’re going to be here for a long period of time.”

Reyes homered off Aaron Nola in the fifth, his 17th, and Ian Kinsler hit a go-ahead double in the sixth.

San Diego’s Eric Lauer (5-4) held the Phillies to one run and two hits in six innings, struck out three and walked three.

J.T. Realmuto homered off Brad Wieck in the seventh, his ninth. He also had an RBI single in the fourth.