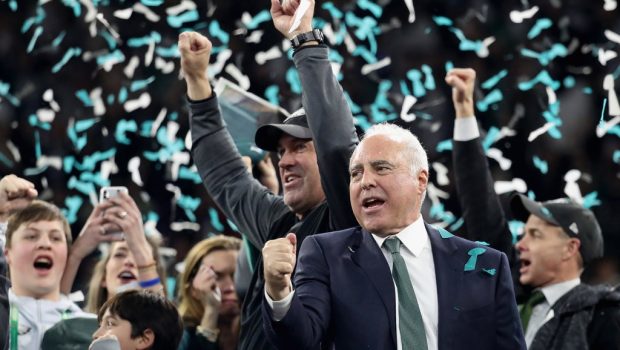 LURIE’S GROUNDHOG DAY: SPEAKS, SAYS NOTHING, BACK TO HIS HOLE!

If you are wondering why you never hear much from Eagles owner on the record — you know, those words with quote marks around them — he demonstrated the reason yesterday at the NFL owners goat rope in Palm Beach.

He spoke for the first time in a year, when he emerged from his groundhog hole long enough to fire coach Doug Pederson, who had coached the Birds to their only Super Bowl win three years earlier.

And, as expected, he had little if anything to say yesterday:

“I think we’re all here because we love American football and it’s more popular than ever,” Lurie told reporters during his opening address, echoing the widespread tenor from the league during this year’s event.

“Last year was kind of a transition year,” Lurie said.

“I think right now we’re at a point where we build for the present and build for the future. And that’s what smart management does. You balance both. And you don’t want to sacrifice the future. But you also want to maximize the present. … That’s how I see it. No timeline. When we won the Super Bowl, were we odds-on to win the Super Bowl? (Was) Cincinnati odds-on this year to get into the Super Bowl? I don’t know. I’m not smart enough to know that. But I do know that if you’re disciplined and focused on maximizing the present and the future at the same time, you have a chance to build a really good roster.”