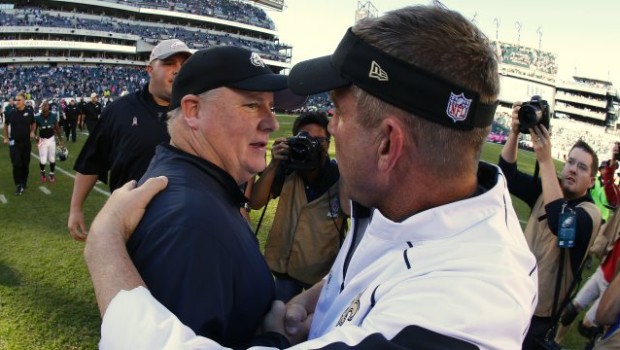 LURIE OUGHT TO SERIOUSLY CONSIDER SEAN PAYTON AS EAGLES COACH

If we are to take Eagles owner Jeff Lurie at his word:

“I think a much more collaborative approach between the coaches and player personnel is the way to go,” Lurie told reporters the day after he fired Chip Kelly (above with Sean Payton), adding that he’d be looking for a coach who is a “smart and strategic thinker,” and someone who “interacts and communicates clearly with everyone he comes in contact with.”

And if Lurie wants to make an impact hire who has already turned a franchise around from being a perennial mess, he might want to talk to Sean Payton.

Payton is under contract to New Orleans and his quarterback Drew Brees has said the two of them are not leaving New Orleans, but 1) we know that it isn’t necessarily their choice; and 2) there has certainly been enough murmurs to think the Saints might be interested in a change.

When Payton took over the Saints in 2006, they were coming off a 3-13 season that had them unable to play at home because of Hurricane Katrina. New Orleans had been to the playoffs once (in 2000) over 13 seasons, and had one playoff victory in the entire existence of the franchise. In fact, the team had been so historically bad that even Payton’s nine seasons and 86-57 total record hasn’t pulled them out of red.

Since 2006, the Saints have been to the playoffs in five of nine seasons, with a record of 6-4 in postseason play. Oh, and a Super Bowl title in 2009.

As he took over the team, Payton had a very productive draft, not only adding players like Reggie Bush, Roman Harper and Jahri Evans, but Rob Ninkovich (currently productive in New England), Zach Strief and seventh round find Marques Colston.

The Saints immediately made the playoffs and got the franchise’s first playoff win. While there were some bumps over the next two years, ownership showed patience as Payton put his team together before the spoils came.

Payton has been an offensive minded coach and, if there is one real weakness to his squads, it is the defense. That’s fine here, though, because the Eagles defense isn’t awful.

While Payton brought in Gary Gibbs his first season, he’s shown a willingness to work with whoever will get the job done. (Rob Ryan clearly wasn’t it.)

Again, though, offense is where Payton shines. Maybe not having Brees could be an issue, but more than likely, Payton’s schemes and overall style would fit with any number of quarterbacks. Of course, the Eagles have a huge question mark at the position, but could have ample opportunity to either keep Sam Bradford, trade for a QB, find one in free agency or even draft one.

Regardless, getting the right signal caller is something Payton can do, as is molding the young receiving corps. While Colston had a huge rookie season in New Orleans in 2006 with more than 1,000 receiving yards, he was bolstered by good production from veteran receivers Devery Henderson and Joe Horn. Likewise, in Philly, Payton could find a way to ease the burden off Jordan Matthews and Nelson Algholor as they grow as players.

Also, consider that, when he was in New Orleans, Reggie Bush added a new dimension catching the ball out of the backfield, but Deuce McAllister was the guy Payton relied on early. The coach could find that balance again for the Eagles with Darren Sproles and Ryan Mathews, and perhaps even make DeMarco Murray relevant again.

The offensive line has issues and is aging badly, and again the quarterback is a concern, but the right coach can turn around the Eagles quickly and easily.

It wouldn’t be cheap to get Payton from the Saints and owner Tom Benson, but it would be well worth it for Lurie.