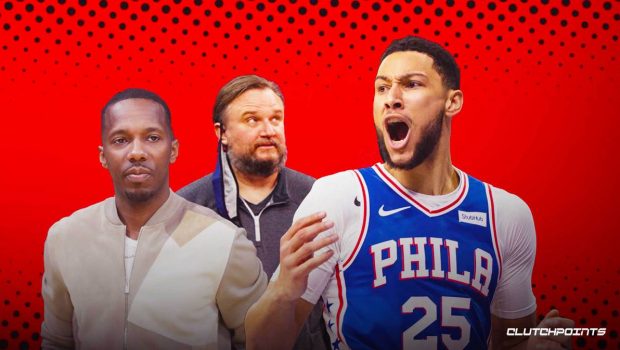 LUNCH WAS ON THE SIXERS, STILL NO DEAL FOR CRYBABY SIMMONS!

Simmons is no closer to honoring the team’s hopes for a return to the court this season — and the Sixers’ steep asking price has brought Simmons no closer to a potential trade, sources told ESPN.

The 76ers’ guard, who has yet to play this season, wants out of Philly.

The meeting at a Philly restaurant was described as amicable and professional, but Morey reiterated the franchise’s stance that it won’t make a Simmons trade unless it believes the return gives it a chance to compete for a championship, sources said.

Paul told the Sixers that Simmons’ mental health hurdles continue to preclude him from a return to play with the team, and the desire for a trade out of Philadelphia remains in place, sources said.

Simmons, 25, is signed through the 2024-25 season — a five-year, $177 million maximum contract — and continues to be subjected to significant fines for games missed and absences from team functions.

The Sixers are targeting top 25-caliber players for trades, but those kinds of assets have yet to be made available to them in offers, sources said. Some teams have even described the Sixers’ asking price for a Simmons’ deal as growing in price — not declining, sources told ESPN.