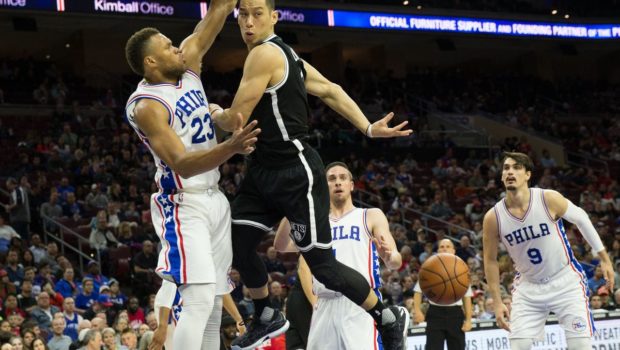 Jeremy Lin and Brook Lopez each scored 16 points to lead the Nets to a 141-118 rout of the Sixers last night at the Wells.

The 19-win Nets have been buried in last place in the NBA standings for most of the season and not even a recent surge could budge them out of the cellar.

Against the Sixers, Brooklyn scored buckets in the first half at the rapid rate of an All-Star Game. The Nets matched a franchise record for points in a first half with 81.

The lowly Nets led at the break with that whopping total. The first-half totals: Brooklyn shot 70 percent (28 of 40), made 12 of 17 3-pointers and had 23 assists on 28 bucks. Lopez had 12 points, Sean Kilpatrick scored 13 and Rondae Hollis-Jefferson had 11 — with the latter two matching or topping their season scoring average.

“I’d say the way we got the shots was like, really beautiful to me,” Lin said. “Beautiful basketball. Super unselfish.”

With 4:20 left in the third, the Nets led 100-67 and would smoke the Sixers for their season-high third straight win. The Nets have won six of the last nine games and are a respectable 10-10 since March 1.

Sixers coach Brett Brown talked before the game about a season goal of finishing in the top 15 in defense. But they might struggle to hit that mark in the final week of the season. The Sixers needed the injury exception to end the season with a full roster and a once-promising middle of the season has hit a roadblock with Joel Embiid, Jahlil Okafor and Robert Covington heading up the list of injured players.

Dario Saric, one of the top contenders for NBA Rookie of the Year, only scored 10 points in 19 minutes; his playing time limited by plantar fasciitis in his left foot.

“I have a minute restriction on him. You know how hard that is to administer,” Brown asked. “It’s like Joel again. In 24 minutes, how do you spend your money? How do you do it where you can end a game with Dario?”

Well, the Nets gave Saric plenty of reason to sit out the fourth.

The Nets stretched the lead early in the second when a loose ball was scooped and fed to Archie Goodwin for a big dunk that sent him crashing to the floor. Goodwin, a first-round pick in the 2013 draft out of Kentucky, impressed the Nets on a pair of 10-day contracts and was signed Tuesday to a multiyear contract.

Brooklyn’s starters took a seat in the fourth and played cheerleaders as the likes of K.J. McDaniels and Spencer Dinwiddie did the bulk of the heavy lifting.