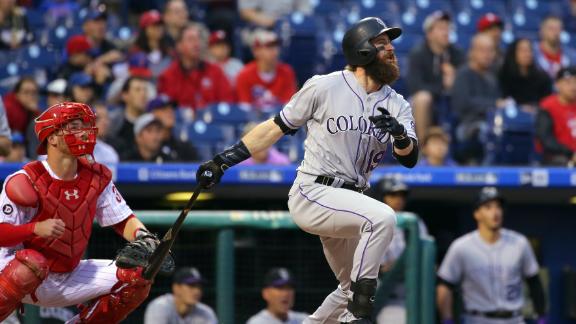 HOW LOW CAN THEY GO? FLAILING PHILS FALL TO ROCKIES 8-2!

At the rate the Phillies are hitting and pitching — really, they aren’t doing either very well — we’ll see some of their prospects in the starting lineup before Father’s Day.

Manager Pete Mackanin benched slumping Maikel Franco and Michael Saunders last night, and it had no effect on the flailing Phils.

Marquez (3-2) allowed one run and seven hits, striking out six.

Zach Eflin (0-2) was roughed up by Blackmon and the Rockies. He gave up eight runs and 10 hits in six innings.

Blackmon gave Colorado a 2-0 lead in the third inning when he hit a long homer off the advertising sign on the facing of the second deck in right-center. He connected again in the fourth to make it 7-1. Blackmon has 11 homers and 40 RBIs while batting out of the leadoff spot.

Parra hit a solo shot in the sixth to extend the lead to 8-1.

The Phillies got their first run when Andres Blanco walked with the bases loaded in the third. Odubel Herrera followed with a double-play grounder to end the potential rally.

Andrew Knapp hit a homer in the ninth off Chad Qualls.