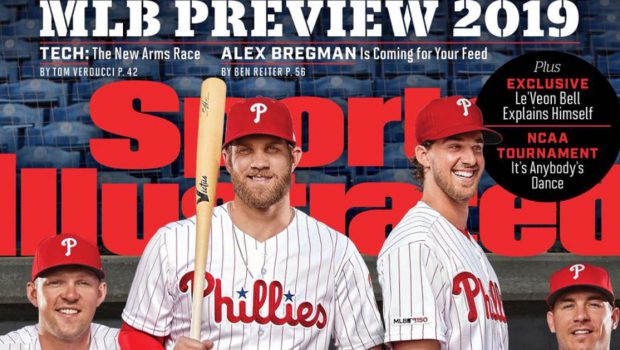 LOVED AND FEARED PHILS ON COVER OF SPORTS ILLUSTRATED!

Last year the Eagles Super Bowl champs made the cover.

Last month it was Joel Embiid and the Sixers.

And this week the Phils are gracing it on newsstands everywhere.

With opening day approaching quickly, four Phillies are on this week’s cover of Sports Illustrated, posing with the words “Loved in Philly, feared everywhere else”.

Looking at Bryce Harper in red and white pinstripes will never get old, but seeing him posing with teammates Aaron Nola, Rhys Hoskins and J.T. Realmuto is quite a sight. All four guys are smiling and looking ready to start this season.

So far, it’s been a big year for Philly sports, as the Sixers were just on the cover in February and the Eagles were there in January. Back-to-back-to-back months with Philly teams on the cover? Not too shabby.