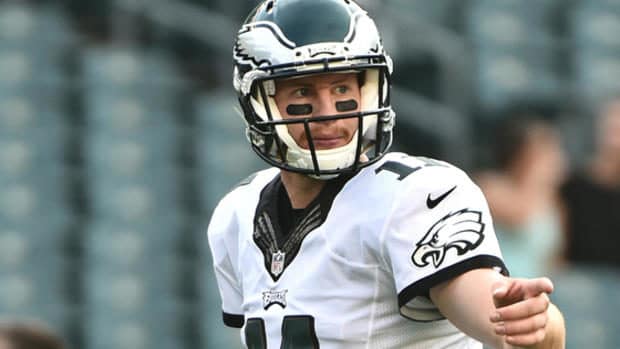 Why were the Eagles so confident in the skills that quarterback Carson Wentz possesses that they felt comfortable trading vet QB Sam Bradford to the Vikes?

For Eagles big boss Howie Boy Roseman, it was love at first sight!

“We drive to the Fargo Dome and Carson Wentz is waiting outside to greet us,” Roseman said today on Good Morning Footbal. “So right there, think about that — how smart is that? We take him up, we take him into the meeting room, his ability to recall, his knowledge of the offense and of what is going on in the National Football League, watching tape with him and him directing it. I remember walking out with our coaches who have been with all these great people and said ‘this is off the charts.'”

“Then we go onto the field and when you watch him warm up, you just see him start to run and he’s like a gazelle. He’s got this long stride and then he just throws the ball — it’s accuracy, it’s arm strength, it’s velocity. You just kind of hear it whip by you. But for us, it was also about fit — for Philadelphia, for our organization.

“So the important thing that we wanted to do was get to know him as a person. So we went out to dinner and as we went into the restaurant … we go to dinner and my phone rings so I say ‘Can I get two minutes?’ And when I’m walking back into the restaurant, the manager of the restaurant and the hostess are talking about Carson Wentz and they don’t know anyone is listening. The manager says ‘Carson is such a great guy. He’s always so classy and so friendly.’ And to me, that was such an important part of this trip — to know how he treats every person. And that’s how we started off our relationship with Carson Wentz.”

Are the Eagles gambling big here? Sure, but at least from what Roseman said on NFL Network Wednesday morning he is personally sold on the decision. It’s better to ride with conviction than to force yourself into a norm that is widely accepted by the rest of the NFL community.

Roseman gets a divided reception among the NFL masses, but it’s hard to deny his passion and his intentions. He’s not worried about how moves will play with his contemporaries and he believes enough in his talent evaluators to let the season ride on Wentz’s shoulders. His reward has already been somewhat cemented — getting a first-round pick back in the 2017 draft — but there is also plenty of upside should Wentz play up to expectations.