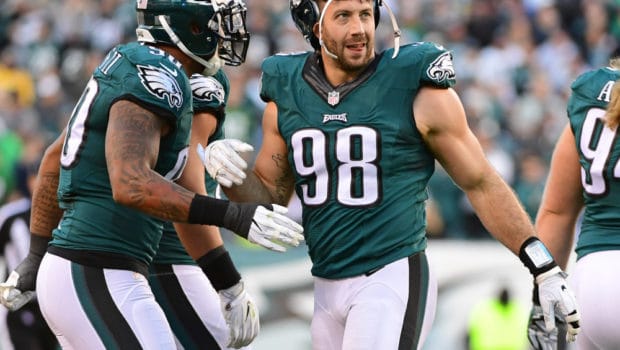 It’s always a nice story when an ex-Philly athlete lands on his feet in another town.

The Eagles cut Connor Barwin because of contract considerations a couple of months ago, and he has found a new home with the Los Angeles Rams.

The Eagles had transitioned him to a 4-3 defensive end, but now he can again rush as an outside linebacker in the 3-4 defense of coordinator Wade Phillips with the Rams.

“It was a big adjustment for me,” Barwin said of playing in a 4-3, via Gary Klein of the Los Angeles Times. “I thought the last month of the season was probably my best four games. And I was excited to be back there and continue to adjust in that new role because it takes time.

“But that didn’t work out and this couldn’t be a better situation for me.”

It works, primarily, because it already has. Barwin played for Phillips during his most productive stretch in the league with the Texans, and the 30-year-old doesn’t appear to have lost a step to his old coach.

“He’s bigger and stronger than he was,” Phillips said. “He ran a 4.5-something at the [NFL scouting] combine when he came out, so he can run.

Barwin’s going to be counted on for more than just pass-rush with the Rams, as he was one of a number of veterans brought in this offseason to lend some ballast to a young team. And with the talent they already had on that side of the ball, it’s the kind of move that could pay big dividends for both the player and the team.