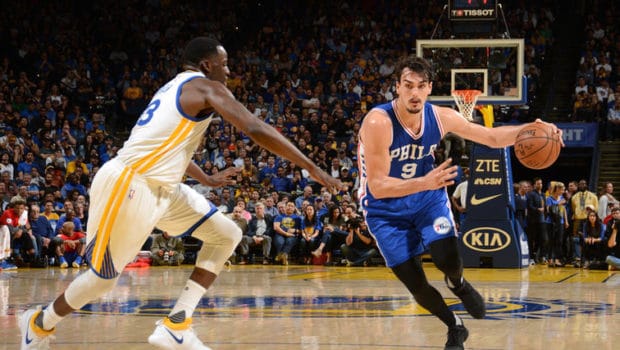 A LOSS IS A LOSS, BUT SIXERS SHOWED THEIR METTLE AGAINST DUBS!

For three quarters, the young Sixers took the game to the Warriors, unnerving Oracle Arena’s 220th consecutive sellout crowd by running crisp, efficient offense; capitalizing on the Warriors’ missed shots; and dictating play on the interior.

A big fourth quarter from the two-time defending Western Conference champs, and their two-time defending MVP however, made the difference. Despite their best efforts, the Sixers came up short in an admirable upset bid, falling to the Warriors, 106-104.

Steph Curry topped all players with 29 points. Dario Saric (above) finished with 25 points for the Sixers, marking the third time on the Sixers’ now-completed four-game West Coast trip that the rookie forward reached the 20-point mark.

“It’s a classic case of us needing the ability to execute on the road in a fourth period,” Brett Brown, whose team went 1-3 on what was a spirited, competitive journey to the other side of the country told Sixers.com. “We’ve said that all along, that fourth periods are different.”

In a wild sequence with 8.5 seconds to go, the Sixers – down by three – had possession, and a sideline in-bounds opportunity. They threw the ball away, setting Matt Barnes up for what seemed to be a no-doubt-about-it runout dunk. But Barnes, chased down by Richaun Holmes, missed the slam, and, along with it, a golden chance to put the Sixers away.

“Any time you lose, I don’t think you’re too happy, so I really can’t say I’m pleased with a loss,” said T. J. McConnell, before adding, “There’s some good things that come out of [Tuesday’s game], but anytime you lose, it doesn’t feel good.

“That’s a championship basketball team we just played,” said McConnell, who produced seven points, 10 assists, and seven rebounds. “I think we’ve got to be one of the youngest teams in the league. We just didn’t really execute down the stretch. We got a little rushed, and had some costly errors.”

“We got stops the way we were supposed to, and got out and ran,” said Robert Covington, who had seven points and nine rebounds after sitting out Sunday’s outing versus the Lakers due to right knee soreness.

Saric was especially big for the Sixers in the third, when he manufactured 11 points, all while building his club’s upset bid. The Croatian chipped in with seven rebounds, and six assists as well Tuesday.

“Sometimes it’s hard, you’re so close,” said Saric. “We are young team. Sometimes, you need like some kind of experience, just lot of this kind of games. We don’t have that. We are young team. Of course, we play a lot of close games, but it’s not same.

“I think that miss us this game, and we know it. They are like some kind of tornado. You know they will come in one part of the game. You try, try to believe. We are young team, we try to fight. Against them, you know, you need to know they are coming, they are coming.

“It hurts, it should hurt,” said Brown. “We put in the time. We were in a position on the road to get a great win. We give Golden State credit. I think that Timmy and Dario and our young guys will learn from this, but it stings, and it should sting. I’m very happy and proud of our guys for the road trip we just finished.”

Jahlil Okafor added 22 points for the Sixers, while Holmes came off the bench for 14 points and eight rebounds.