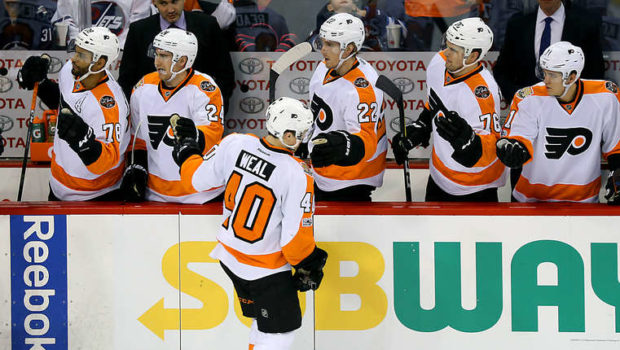 LOSING IT OUT WEST! FLYERS FALL 3-2, PLAYOFFS ARE SLIPPING AWAY!

Mark Scheifele and Blake Wheeler each had a goal and two assists to help the Winnipeg Jets to a 3-2 win over the visiting Flyers last night.

Mathieu Perreault had a goal and an assist for the Jets (33-33-7), who moved within 10 points of the second wild card into the Stanley Cup Playoffs from the Western Conference.

Michael Hutchinson made 24 saves in his first start since Jan. 16. He made 13 saves in relief for his first win since Dec. 22, a 5-4 victory against the Minnesota Wild on Sunday.

Jordan Weal (above) and Matt Read scored for the Flyers (33-31-8), who remained seven points back of the Toronto Maple Leafs for the second wild card in the East.

Steve Mason made 30 saves, losing for the first time in regulation against Winnipeg in his career (6-1-1). The Flyers had won their past six games against the Jets.

“I don’t think anyone is too pleased with this game,” Mason said. “It’s frustrating for everybody, considering the situation we are in. We need to be a more desperate hockey club. I don’t think we were tonight.”

Weal made it 1-0 at 4:28 of the second period. Wayne Simmonds’ initial shot was saved by Hutchinson, but Simmonds collected his own rebound behind the net and sent it out front to Weal for his fourth goal of the season.

“We started the game well, played the game we kind of wanted to,” Flyers captain Claude Giroux said. “They have players that make plays on the other side and a couple mistakes and it was in our net.”

Perreault tied the game 1-1 at 7:02 when he tipped Wheeler’s point shot for a power-play goal.

Read scored shorthanded with two seconds left to make it 3-2.

Scheifele’s forecheck off a neutral zone faceoff helped create a turnover in the Flyers zone. Wheeler picked up a loose puck and passed to Scheifele and his quick wrist shot beat Mason on his glove side.