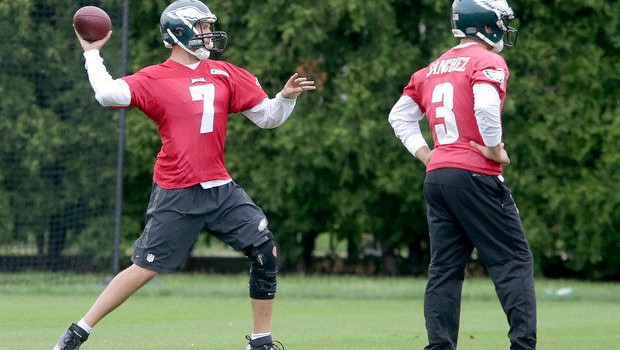 The cynics in the local media took Chip Kelly’s word with a grain of salt.

When the Eagles’ Supreme Leader met with the gaggle of press last Thursday, he said new QB Sam Bradford would participate in 7-on7 drills this week.

And today he did.

Bradford worked with the fourth-team offense agains the fourth-team defense. Mark Sanchez, who has been taking first-team reps with Bradford injured, continued to do so, followed by Matt Barkley and Tim Tebow.

His third pass, however, was nearly picked off by safety Malcolm Jenkins.

Bradford taking part in the drills is a positive sign for anyone who wants him out there in Week 1 vs. the Atlanta Falcons. Bradford said last week that he has noticed a real difference in how his knee has responded to treatment over the past month. He suffered his second ACL injury last September as a member of the St. Louis Cardinals.