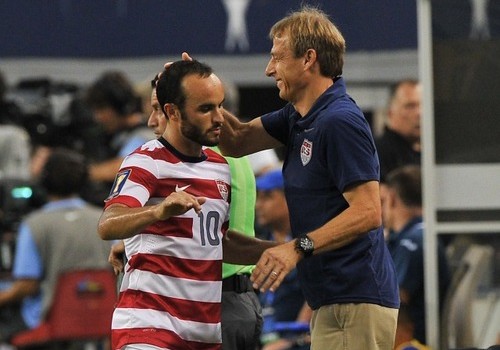 Landon Donovan (above left with U. S. manager Juergen Klinsmann), whose services could’ve perhaps been crucial in the wake of Jozy Altidore’s hamstring injury, was critical of Klinsmann’s tactical approach in the U. S.’s final game, a 2-1 loss to Belgium

“I think we’re all disappointed in what happened yesterday,” he told MLS.com. “I think the most disappointing thing is we didn’t seem like we gave it a real effort, from a tactical standpoint. I thought the guys did everything they could, they did everything that was asked of them, but I don’t think we were set up to succeed yesterday, and that was tough to watch.”

Donovan was likely referring to Belgium’s relentless assault on Tim Howard compared to the U. S.’s meager offense, at least throughout regulation.

Donovan’s two most poignant criticisms were that Klinsmann deployed a 4-5-1 formation – a more conservative approach against the likes of aggressive attacking teams like Germany and Belgium – while also misusing Michael Bradley. Donovan did acknowledge that it’s easy to second-guess at this stage, and he credited the team for advancing out of the Group of Death, but he clearly felt that changing the American style to cater to its opponents was the wrong decision.

“They were set up in a way that was opposite from what they’ve been the past couple years, which is opening up, passing, attacking – trying to do that. And the team’s been successful that way. Why they decided to switch that in the World Cup, none of us will know. … If I’m in that locker room before that game – before the Germany game, before the Belgium game – and the coach walked in said we’re playing a 4-5-1 and Clint is up top by himself, I would’ve been disappointed, because I would’ve said let’s go for it. I want a chance to try and win that game.”

Donovan’s other point, regarding Michael Bradley’s positioning, was even more salient. Bradley was criticized for not commanding possession in the midfield and losing the ball far too easily. Donovan, and numerous other pundits for that matter, asserted that he was out of position and being asked to facilitate offense while also tracking back on defense to help a shaky backline.

“Michael was put in the wrong position. He does a better job, as you saw with the Julian Green goal, being in a deeper position,” he noted.

Some of Bradley’s offensive positioning was a direct result of Jozy Altidore’s injury in the attacking third. It simply left the U. S. with little choice in terms of attacking formations. Bradley, who played every minute of the 2010 and 2014 World Cup for the U. S., may have not been as effective as he could’ve been, but his conditioning and poise were vital with such a young team. He was just asked to plug too many gaps, and that’s not Klinsmann’s fault, even if Donovan doesn’t agree.

And no, if you’re wondering, Donovan took the high road and didn’t address how the team would’ve fared had he been selected to the roster. It’s probably best he didn’t.