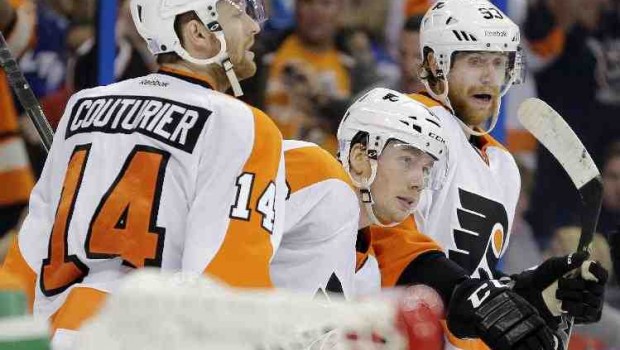 WHAT TO LOOK FOR IN TONIGHT'S FLYERS-OILERS GAME

The Flyers won both games against the Edmonton Oilers last season, including a 4-3 shootout win in Edmonton on Dec. 28, 2013. Wayne Simmonds had two goals and Michael Raffl scored the game-deciding goal in the shootout. The Oilers’ David Perron and Taylor Hall each had a goal in both games.

Oilers: With Hall out 2-4 weeks with a sprained knee ligament, Benoit Pouliot stepped into Hall’s spot at left wing on the top line with center Ryan Nugent-Hopkins and right wing Jordan Eberle at practice Monday. Defenseman Andrew Ference, who received a three-game suspension from the NHL Department of Player Safety on Monday, will also be out of the lineup, and coach Dallas Eakins said he’s looking for other players to step up in a big way. “It’s a team sport,” Eakins told the Oilers website. “We need to lean on others and need to lean on some [American Hockey League] call-ups. Some guys who had good camps and had been playing in [Oklahoma City] to come up and help us.”

Flyers: Flyers defenseman Braydon Coburn took the next step in his recovery from a lower-body injury Monday when he skated for about 30 minutes. It was his first time on the ice since Oct. 21, and he reported no pain after the workout. “It was good to get back out there and ease into it,” Coburn said, according to CSNPhilly.com. “There is definitely improvement and it felt good. … I thought it was good to get the warm-up in and see how it reacts and go from there [Tuesday].” With Coburn and fellow veteran defenseman Andrew MacDonald still out of the lineup, it’s expected that Carlo Colaiacovo, signed to a one-year, two-way contract Oct. 30, will make his Flyers debut Tuesday.