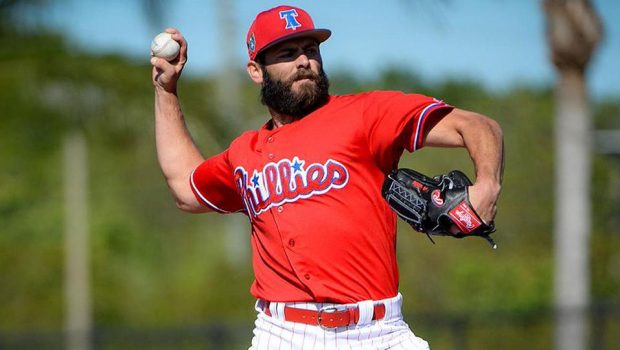 He is making his Phillies debut today against the Tigers, though he isn’t sure how many innings he’ll go.

“I’m confident, but it doesn’t mean I’m right,” Arrieta told MLB.com. “I’ve been that way my whole career. I’m a little eager, and I like to push the envelope a little bit, but I understand that longevity and long-term health for this group of guys in my situation is vitally important. It does no good if we have something stupid happen in the first week to where I’m not able to be out there for the guys, both from a performance standpoint and a mentorship standpoint. Those are the two most important things, regardless of how eager or ambitious I am to get out there.”

“I don’t think we’re going to set a limit on it, or a floor,” Arrieta said. “I think that we’re probably going to just take it inning by inning. See how the body is feeling after the first, same with the second and kind of go from there. I’m sure Kranny [pitching coach Rick Kranitz] and Kap [manager Gabe Kapler] have a limit in mind, but I think they’re going to let their eyes kind of be the judge and go from there.

“But it would be nice to get three or four.”