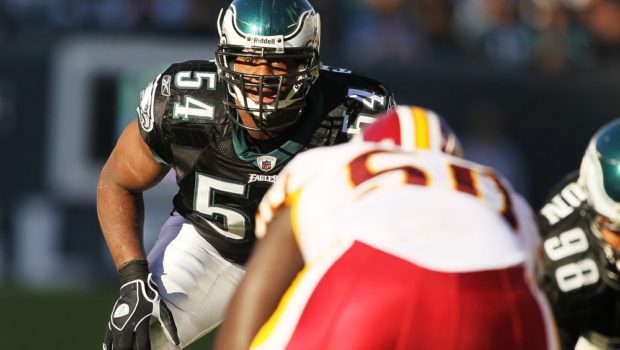 Talk about an overdue honor!

The Eagles will induct linebacker Jeremiah Trotter into their Hall of Fame during a halftime ceremony Monday night of their game against the Green Bay Packers.

Trotter was drafted by the Eagles in the third round (No.72 overall) of the 1998 NFL draft, and more than lived up to his nickname: The Ax Man!

In four seasons with the Birds, Trotter registered 361 tackles, nine sacks, five interceptions and four forced fumbles. He led the team in tackles three consecutive years and made two straight Pro Bowls in the 2000 and 2001 seasons.

Trotter signed a free agent contract with the Redskins in 2002 but was released two years into the seven-year contract. He then returned to the Eagles in 2004 and helped the defense that was an integral part of their Super Bowl appearance that season.

The veteran linebacker was once again named to the Pro Bowl for consecutive years as a member of the Eagles in 2005 and 2006. The Eagles released Trotter in August of 2007 after which he signed a one-year deal with the Buccaneers.

The Eagles brought Trotter back for a third time in 2009. He signed a one-year-deal and was not re-signed after the season.