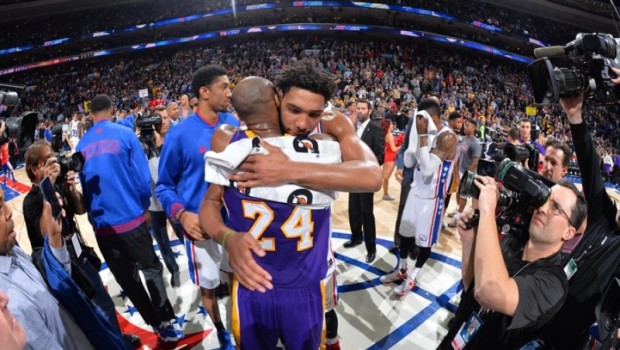 Sixer rookie Jahlil Okafor wraps up Kobe after the game.

It was a nice gesture from a retiring geezer who had just been beaten by the home team.

You can call it a passing of the torch or a baton or a kidney stone, for all I care.

The Sixers’ long national nightmare is over!

And Kobe Bryant breezed through the Sixers locker room and said to no one in particular, “keep it going, guys.”

His homecoming game spoiled, Bryant said one final goodbye to Philly, and the 76ers said good riddance to the longest losing streak in major U.S. professional sports – winless in 28 games dating to last season. And 0 for 18 to begin this one.

With the spotlight on Bryant during the final game of his career in his hometown, the Sixers stole the show and defeated the Los Angeles Lakers 103-91 on Tuesday night for their first victory of the season.

The Sixers remain tied for the worst start in NBA history with the 2009-10 New Jersey Nets, who also opened 0-18.

It was the first win for the Sixers since March 25 at Denver.

Coach Brett Brown’s team has long languished at the bottom of the NBA standings and reeled off two separate losing streaks of at least 26 games in his three seasons.

For one night, in front of a sellout crowd of 20,510 that came to cheer Bryant, the streaks hardly mattered.

“I’m pleased for the city,” Brown said. “We don’t want this streak continuing.”

Hours earlier, Bryant felt the love as soon as he entered the Wells.

He took selfies with fans who might never see him play again, and his presence injected a playoff atmosphere into a city that has lost much of its passion in NBA basketball.

With a packed crowd standing and roaring in appreciation, Bryant was lauded like a hometown hero, not the “Hometown Zero” he was once labeled in Philadelphia’s tabloids.

Bryant, who will end his 20-year career this season, opened the first leg of his farewell tour in his hometown and was feted with the kind of reverence and gratitude normally reserved for a Sixers great.

“I wasn’t expecting that type of reaction, ovation,” he said. “Deeply appreciative beyond belief. It was really, really special.”

Playing with the shot selection of a pickup artist, Bryant tried to deliver a special performance in his finale.

He buried a step-back 3-pointer off the opening tip.

He hit another 3 on the next possession.

Bryant made it 3 for 3 and had the Philly crowd chanting “M-V-P!” as he turned back the clock to his championship form.

“It was a little spurt of old-school Kobe,” Noel said.

Bryant said he could tell the start made the Sixers a little starstruck – most were babies when he started his career.

“I could sense they were like `I really don’t want to touch him.’ … `Is this going to be an 81 type of situation?”‘ Bryant said. “I’m just playing possum because I know my legs ain’t going to carry this energy for 48 minutes.”

By the fourth quarter, the Philly fans had turned their attention toward the home team, chanting “Beat L.A.!” when beleaguered rookie Jahlil Okafor made a layup for a 94-80 lead.

Okafor, the No. 3 overall pick out of Duke, has been attached to a string of off-court incidents that included reckless driving and a fight in Boston. Brown said Okafor, who has apologized for his recent decisions, will likely soon be accompanied by team security on public outings.

Bryant said he would simply tell the 19-year-old rookie to stay focused on basketball.

The Sixers stayed focused and finally finished the job after taking an 80-75 lead into the fourth.

Robert Covington scored 23 points and Jerami Grant and Noel had 14 for the Sixers.

He smiled after every shot and bantered with fans, some who made “Thank you, Kobe” signs.

Bryant thumped his chest, waved to the fans, blew a kiss and was serenaded with “Kobe!” chants as he walked off the Sixers’ court for the final time.

“You can’t script this stuff – I can’t,” he said. “The amount of respect and appreciation and adoration I have for the city and to be able to have this moment here just means everything to me.”

Moses Malone, the late 76ers star selected one of the NBA’s 50 greatest players, was honored at halftime. Malone, who died in September at 60, was the NBA Finals MVP in 1983 when he led the Sixers to the title. His No. 2 was on the back of Philadelphia’s warmup jerseys with “Chairman of the Boards” on the front. The Sixers will retire his number next season.