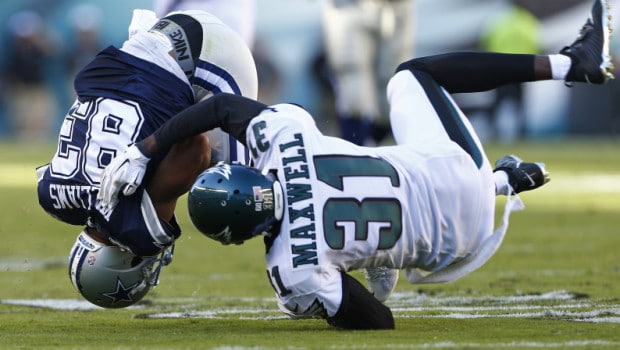 LOCAL LAME-ASS MEDIA FINALLY GETS IT RIGHT: THE EAGLES SUCKED!

It’s no secret that the local lame-ass media have been dying to find something of substance to criticize about Chip Kelly’s leadership of the Eagles.

Here’s the thing. The Eagles problems can be, and will be, fixed. Chip Kelly and his coaching staff are too good to sit back and think it will just get better with some rest and a different flavor smoothie.

Dallas isn’t going to get Bryant and Romo back before they are healed and that’s looking like every bit of eight weeks, or so. And then there’s the rust factor.

Expect Kelly to make changes before the Eagles play the Jets next Sunday. Start with the offensive line, which the coach singled out Sunday, it will look different next week, either schematically or personnel-wise, but it will be different.

When the schedule came out last spring, I had the Eagles beginning 0-2, not like this but 0-2 all the same. And I still had them going 10-6. Check the gallery above for proof.

The Eagles need their top players to play like top players. Dallas is relying on backups at key positions.

I’m sticking with the top players.

Kelly’s postgame news conference, his opportunity to explain himself in the loss’s immediate aftermath, lasted seven minutes. Not to twist the knife, but it’s worth noting that the Eagles offense possessed the football for less time – 6 minutes, 51 seconds – in Sunday’s first half. After two 10-6 seasons, after he won his power play against former general manager Howie Roseman in January, Kelly gambled that only by radically changing the roster could the Eagles evolve into Super Bowl contenders. But at the moment, from the limited playing time he gave his first-team offense during the preseason to the wholesale remaking of the secondary, it looks as though he overestimated his players’ ability to cohere quickly into a functional football team.

“I don’t think we overestimated or underestimated,” he said. “We had to be ready when the season started.”

CHIP KELLY looked small and pale, standing behind a Lincoln Financial Field lectern in the aftermath of the worst 20-10 loss in the history of the National Football League.

The only thing at the Linc that looked more colorless and slight than Kelly yesterday might have been his run-based offense, which totaled 7 yards on 17 carries in the most futile effort of the Kelly era – 15 carries for minus-2 yards on runs that weren’t Sam Bradford scrambles.

Chip Kelly has now coached 35 regular-season and playoff games with the Eagles, but his vaunted offense never appeared as inept as it did in front of the home crowd Sunday. There have been times when they struggled to move the ball because of injuries at quarterback or on the offensive line, but this is a healthy unit that entered the season with Super Bowl aspirations.

“It’s more concerning now because it’s now,” Kelly said. “Just because we went through it before doesn’t mean we’ll get it straightened out.”

They’re now 0-2 with a running game that’s broken, a quarterback who is inconsistent, injuries to key inside linebackers Kiko Alonso and Mychal Kendricks, and two road games ahead of them.
Daily News’ Marcus Hayes

By most measures, Bradford has been the worst player on a bizarrely reconstructed Eagles team, which, after winning 20 games in two seasons, Chip Kelly demolished and rebuilt: Nine of the 24 most significant players either cut, traded or simply set adrift, each of them still good enough to command a job on Sunday.
Inquirer’s Jeff McLane

Only a true north-to-south running back like DeMarco Murray would have been tackled for a loss in the backfield rather than on the outside against the Cowboys on Sunday.

Murray rushed 13 times in the Eagles’ 20-10 debacle of a loss to Dallas and gained a mere 2 yards. But at least he fell to the ground in between the numbers rather than run around sideline to sideline, like McCoy did when there was nary a hole to run through.

…the way Bradford looked in this game was almost worse than the simple outcome.

There is a swagger that great quarterbacks have, even in defeat, even as they throw stones against a wall that isn’t going to fall that day. They look the way quarterbacks are supposed to look. Bradford didn’t. He looked confused, almost foggy, as he tried to figure the thing out.