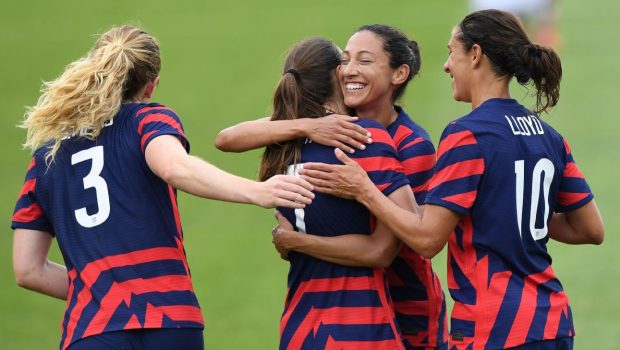 By Mary Cunningham and the Associated Press

Carli Lloyd started and Julie Ertz sat it out with a knee as the USA beat Mexico 4-0 in the American women’s final match before the Olympics.

The United States is undefeated in 44 straight matches, the second-longest unbeaten streak in team history. The Americans also extended their winning streak against Mexico to 15 games and improved to 39-1-1 overall. The lone U.S. loss in the series was in a 2010 World Cup qualifier.

U.S. coach Vlatko Andonovski continued to fine-tune his lineups in advance of the Olympics later this month. The United States, a four-time gold medal winner, is aiming to become the first team to follow a World Cup title with an Olympic gold medal.

“I feel good,” Andonovski said. “Very excited about the trip. Obviously I feel like we’re prepared. I feel like we are moving in the right direction and slowly but surely fulfilling all the tasks necessary to be fully prepared for the Olympics.”

Tobin Heath started after coming off the bench and scoring in the United States’ first send-off game against Mexico on Thursday, which the Americans also won 4-0. She hadn’t played for some six months because of injury.

Lloyd got the start Monday in place of Alex Morgan, and midfielder Rose Lavelle got the nod while Kristie Mewis and Megan Rapinoe were available off the bench.

Rapinoe, Mewis and Morgan all started the second half.

The United States scored all its goals in the first half. Horan scored on a volley in the sixth minute, followed by Lloyd’s diving header in the 11th.

“You guys don’t know how often I work on volleys, they’re my favorite shot to hit,” Horan said. “So yeah, I was a little excited when that opportunity came. Thank goodness I didn’t miss it.”

After an own-goal in the 37th minute, Heath scored in the 39th.

“The energy is really high, the environment feels really great,” defender Becky Sauerbrunn said. “The form on the field, I think there are still things that we’re just narrowing down, and to me it’s always going to be about precision. But I think we’ve made a lot of strides, especially in the final third, with that precision.”

Horan was seen with ice on her knee, but Andonovski said after the game that it wasn’t a concern.

Next up for the United States is the Tokyo Olympics. The Americans play Sweden — the team that knocked them out of the 2016 Games in the quarterfinals — to open the tournament on July 21.

The team will not have any scrimmages against other teams before the opener because of COVID-19 protocols.