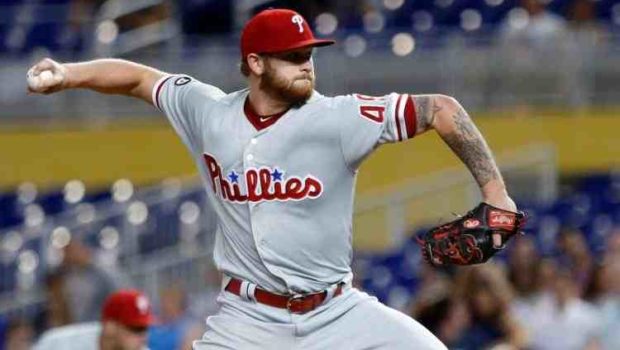 LIVELY AND PHILS SHUT DOWN STANTON FOR 3-2 WIN!

Giancarlo Stanton ended August with an 0-for-5-er as the Phillies beat the Miami Marlins 3-2.

MLB home run leader Stanton failed to get the ball out of the infield in three plate appearances against Ben Lively (above). Facing Phillies closer Hector Neris, Stanton squandered a chance to put the Marlins ahead.

“He had a ball up in the zone that last inning, but he missed it,” Phils manager Pete Mackanin said. “Every time he comes up I get scared.”

His young counterpart, Phillies rookie Rhys Hopkins, singled in the fifth inning to extend his hitting streak to 13 games. That’s the longest streak by a Phillies player in the first month of his career since Hall of Famer Chuck Klein had a 13-game streak in 1928.

Neris struck out J.T. Realmuto with the bases loaded to end the game for his 17th save. The Marlins went 2 for 14 with runners in scoring position, and they are 3 for 36 in those situations this week.

Lively (2-5) won for the first time since his major league debut on June 3. He allowed two runs in six innings and hit a two-run single, increasing his slugging percentage to .412.

“If I swing it hard enough and get hold of it right, good things will happen,” Lively said.