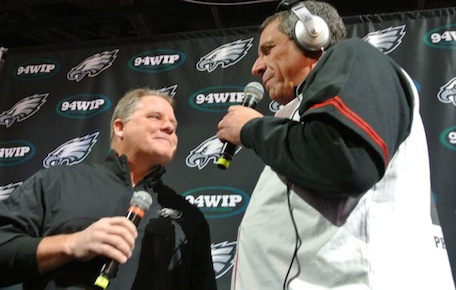 ‘I LISTEN TO THEM AND CHUCKLE’ — EAGLES’ KELLY ON TRADE REPORTS

With the NFL trade deadline approaching at 4 p. m. today, the Eagles spent Monday knocking down the rumors that they will make a deal.

The Eagles reportedly are interested in Bucs receiver Vincent Jackson, and they’re looking for a safety who’ll be an upgrade over Nate Allen, who was caught flat-footed and burned by Cardinals receiver John Brown for the game-losing touchdown pass on Sunday.

But the Eagles aren’t admitting to it.

On Monday, coach Chip Kelly (with WIP blowhard Angelo Cataldi in photo above) downplayed any and all trade talk during an appearance on WIP radio.

“I listen to them and chuckle,” Kelly said of the reports.

It’s possible that the reports of interest in Jackson come from the Buccaneers, who possibly would like to get a viable offer for him before Tuesday at 4:00 p.m. ET, but the Eagles were — and presumably still are, after Sunday — interested in finding a safety to pair with Malcolm Jenkins.

Is it really a surprise that the fast-talking, quick-thinking Kelly would constantly be searching and scanning for ways to get more pieces that would further shape the roster into the team he envisions? The offseason move for running back Darren Sproles validates Kelly’s willingness to make deals.

Part of making deals is making good deals. By downplaying the reports, Kelly and company have a chance to buy low, if/when the phone rings between now at 4:00 p.m. ET.