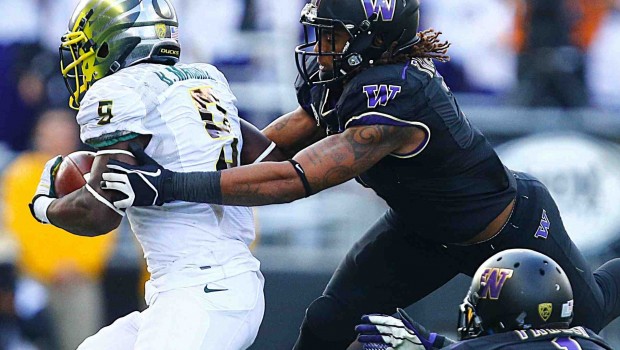 HERE ARE THE LINEBACKERS EAGLES WILL BE WATCHING AT COMBINE

You’ve got to figure that Eagles’ Supreme Leader Chip Kelly is not counting on DeMeco Ryan returning from his second ACL surgery and for Trent Coles to have priced himself off the Birds roster.

So, here are the linebackers on display at this week’s NFL Combine in Indy that should get Kelly attention:

OLB Alvin “Bud” Dupree, Kentucky: Dupree (6-foot-4, 262 pounds) was listed as an end at Kentucky, played a hybrid end/linebacker spot and likely will be an outside linebacker in the NFL; he will go through the linebacker drills at the combine. He should wow onlookers — especially given his size — during the combine tests; his vertical jump has been measured at 40 inches and his broad jump at 10-foot-7. There’s also this: Kentucky uses the “Catapult” monitoring system and Dupree was clocked at 20.5 mph in a game in 2013. Yes, he still is learning the nuances of the game, but “wow” numbers in the combine tests can cause folks to forget all about weaknesses.

OLB Hau’oli Kikaha, Washington: Kikaha (6-2½, 246) led the nation with 19 sacks and was second with 25 tackles for loss; he also is Washington’s career sacks leader with 36. His left knee is a potential concern; he missed most of the 2011 season with after he suffered a torn ACL, then reinjured the same ligament in fall camp in 2012 (while covering Austin Seferian-Jenkins on a pass pattern). His medical exam will be pored over. In addition, Kikaha is known as a high-energy, high-motor guy who makes plays because of his relentlessness, not necessarily his athleticism. Thus, his numbers in the combine tests will be pored over, too. He played a hybrid end/linebacker position at Washington, and teams are interested in finding out if he can be a “pure” 3-4 outside ‘backer.

ILB Benardrick McKinney, Mississippi State: Is he the best pure inside linebacker available (NFL.com i sputting TCU’s Paul Dawson in the OLB category, though he seems able to play inside and out)? A strong combine performance will help his case. His size (6-5, 249) is intriguing for an inside guy, but there are questions about his agility and movement skills. Obviously, he cannot alleviate all the concerns in Indianapolis, but he could tamp down some doubts, for sure.

ILB Denzel Perryman, Miami:Perryman also is in the running to be the first inside linebacker off the board. His size, though, is seen as a hindrance; he measured a bit under 5-11 and weighed 248 pounds at the Senior Bowl. He hits a ton, plays with a nasty streak and understands leverage (a good thing when you’re under 5-11). Given his perceived limitations, his combine numbers are going to be monitored; his 40 time will be interesting, for sure.

OLB Shaq Thompson, Washington: Thompson is an excellent athlete with a lot of versatility — so much of both, in fact, that he felt the need to tell people he sees himself as a linebacker and not a running back in the NFL. He should score well in all the combine events, which will lead to talk about how early he will go in the first round. He almost certainly will be the first linebacker chosen.

OLB Max Valles, Virginia: Speaking of highly athletic linebackers, here’s Valles. He likely should’ve stayed for his senior season because he remains raw as a player, but he is an excellent athlete. He had 13 sacks and 18 tackles for loss in two seasons for the Cavaliers; almost 25 percent of his college tackles were tackles for loss (18 of 78, or 23 percent). But Valles needs a lot of refinement as a pass rusher, with NFL Media analyst Lance Zeirlein saying Valles “relies solely on his outstanding athleticism and physical tools rather than an understanding of how to play the game.” Still, that athleticism should be on full display, and when that happens, you just known a handful of teams will focus on his upside and not his faults.