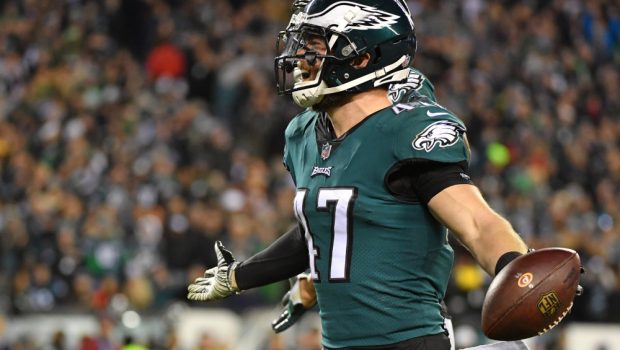 LINEBACKER NATE GERRY IS THE MAN IN THE MIDDLE FOR THE EAGLES!

He’s bulked up to 235 pounds after weighing 212 pounds when the Eagles drafted him in the 2017 fifth round.

With the Eagles’s first exo tomorrow night against visiting Tennessee, Gerry is the starting middle linebacker.

“I feel like I’m able to make the calls out there and I feel like I’m trusted to play with confidence and play faster,” Gerry told Eagles.com after practice yesterday.

“I’ve put in a lot of work in the film room and in the weight room to earn that trust. The thing about the NFL is that you have to be consistent and do the right things over and over and over again. I think a lot of my teammates can see that. I’ve learned a lot about that from those guys, so they see the work I’ve put in.

“I’m looking forward to playing Tennessee. I’ve seen enough of our offense and our guys. It’s time to see something different.”

“I want to be ‘the guy.’ I’ve always been the guy to make the calls on defense in my career. I’ve been one of those ‘leader’ guys who has lined everybody up and taken that responsibility, so this is no different,” Gerry said. “It’s an audition for me. I look at it that way every day, really. I have to be confident in what I’m seeing and trust my eyes. I’ve worked hard at this. I’m ready for this opportunity.”

New Eagles linebackers Zach Brown and L.J. Fort aren’t ready and Kamu Grugier-Hill is sidelined indefinitely with a knee injury suffered over the weekend in practice. Nigel Bradham, the incumbent SAM linebacker, hasn’t yet gone 100 percent in Training Camp as he recovers from a toe injury suffered in last year’s postseason. Brown is working to establish himself as a starter. Fort has worked across the board learning all three positions.

“We’re going to find out a lot,” Gerry said. “We’ve all been pushing each other and that makes us better. It’s just good to see another offense on the other side of the ball. I’ve figured out a lot in my three years. I sure hope the coaching staff trusts me. They’ve asked me to do a lot of things and I love that. I need to get out there and show them what I can do, so the more they ask me to do, the better.”

Nathan Gerry as the team’s middle linebacker? He’s in that position for the preseason opener, and Gerry intends to take full advantage of the moment.

“With Nate, it gives him a great opportunity to really crack in there with the ones (starters) and show his ability,” head coach Doug Pederson said. “He’s a very smart football player, he’s athletic, he’s a core special teams player. He’s going to get a lot of opportunities. Yeah, he’s filled in nicely.”

Said Gerry: “Thursday night is a football game, whether it’s preseason or not. I love football and I understand what’s at stake here, so this is extremely important for me. I’m going to treat it that way. I want to play my best football and earn my place. It starts against the Titans for me. I’m fired up for this.”