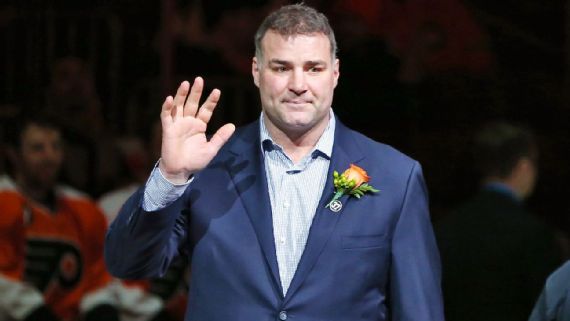 LINDROS DIDN’T WIN FLYERS A CUP, BUT HE WAS ONE GREAT PLAYER

“We had a number of really good teams,” said Lindros. “I think that feeling that you get when a line starts to come together — and I was fortunate enough to play with Mikael Renberg and Johnny LeClair for quite an extended period of time — that feeling that you get when things start to click and your team starts to improve, we had a couple of dry years initially. You just feel that momentum of the team taking off and you think to yourself, ‘We’re way better than we were last year,’ and things greatly improve, and you’re looking to playoffs, and not just one round but hopefully four rounds. It was a great experience to be part of the Flyers.”

He won Olympic gold with Team Canada in 2002 at Salt Lake City but never a Stanley Cup, falling short with the 1997 Flyers versus the Detroit Red Wings, and he said Monday that leaves “a void.”