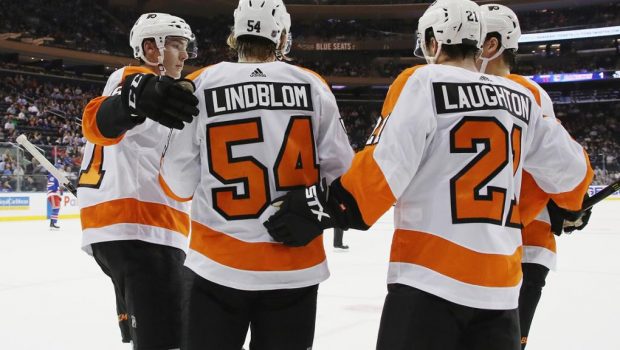 LINDBLOM COMES UP BIG IN GOAL AS FLYERS BEAT RANGERS 6-4!

Oskar Lindblom scored two goals and Carter Hart made 25 saves in the final two periods to lead the Flyers to a 6-4 win over the Rangers at Madison Square Garden.

Hart played the final 40 minutes and he stopped 25 of 27 shots with one of his two goals allowed coming via Rangers 5-on-3 power play.

Hart also stopped 17 of 18 shots in the final period with the Rangers pushing on a 6-on-3 advantage with their goaltender pulled in the final minutes of regulation. He has now played 70 minutes of action in the preseason and stopped 36 of 38 shots he has faced to post a .947 save percentage thus far.

Brian Elliott got his first start of the preseason, stopping 11 of 13 shots in the first period.

All three Flyers first-period goals were scored by one line —Oskar Lindblom tallied a pair of goals and added an assist for three points, while Scott Laughton had helpers on all three tallies and Corban Knight had a goal and two assists.