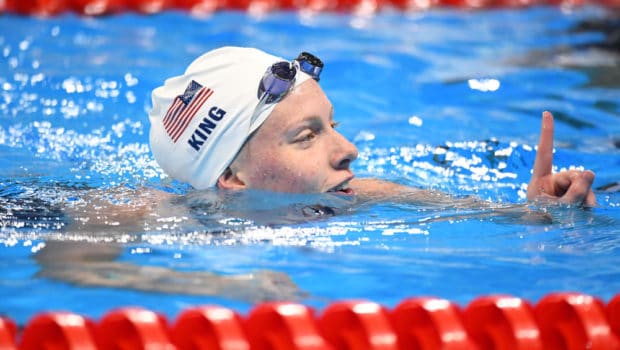 American swimming star Lily King won her gold last night and then took off after all the drug cheaters in the Rio Olympics.

King took her crusade against doping to a new level following her victory in the 100-meter breaststroke final, by insisting that American athletes previously banned for drug offenses should have been kicked off the United States team.

King relegated Russia’s Yulia Efimova, a confirmed drug cheat who was controversially reinstated into the Olympic program just hours before competition started last week, to the silver medal after a long war of words regarding whether her rival should have been allowed to swim.

When asked if U.S. athletes who have fallen foul of the drug testers, such as sprinters Justin Gatlin and Tyson Gay, deserved to be in Rio, King, 19, pulled no punches.

“I have to respect (the track authorities’) decision even if it is something I don’t necessarily agree with,” King said. “No, do I think people who have been caught doping should be on the team? They shouldn’t. It is unfortunate we have to see that.

“It is just something that needs to be set in stone that this is what we are going to do. Let’s settle this and be done with it. There should not be any bouncing back and forwards.”

Gatlin is seen as the most serious challenger to Usain Bolt’s dominance in the 100-meters and will also compete in the 200-meter and the 4×100 relay. Gay will run the relay only.