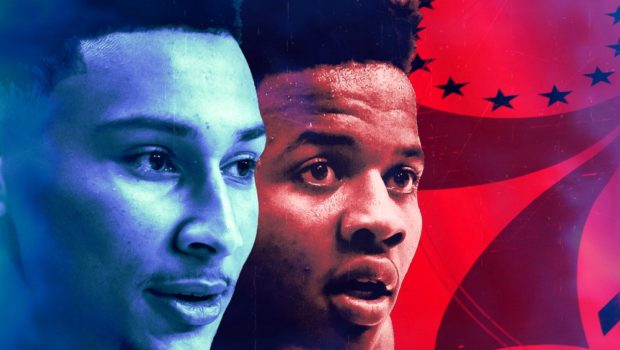 LIKE A GLOVE! HOW FULTZ FITS WITH SIXERS’ SIMMONS!

Lost in all the sound and fury of the past 24 hours since it was announced that the Sixers were trading their No. 3 pick to the Celtics for the No. 1 overall pick is:

Markelle Fultz is an all-around point guard who can score from all levels of the floor, off the dribble or off the catch.

He has excellent passing vision and significant defensive upside. Fultz is raw but should be able to help right away. The Sixers ranked 27th in pick-and-roll scoring efficiency, per Synergy, and Fultz will immediately boost their numbers with his dynamic abilities as both a scorer and a playmaker.

As the Ringer says:

Taking the best player available was a major tenet of Sam Hinkie’s drafting style, whether it was Dario Saric, whom they had to wait two years for; or Joel Embiid, who had, and still has injury concerns; or Jahlil Okafor, even though Nerlens Noel and Embiid were on the roster.

Because of all that wheeling and dealing, Bryan Colangelo has the luxury of selecting Fultz — not only the best player available in the draft, but also a great fit for the team drafting him.

Teams don’t normally draft for fit, but fitwas the problem when the Sixers were picking at no. 3. No realistically available player made sense with their roster construction.

Colangelo had to find a player who matched with 2016’s no. 1 pick Ben Simmons, a point guard with a forward’s body who shoots with the wrong hand. Simmons is a generational talent with a collection of super powers — strength, speed, and telepathic passing.

But Simmons shot 18-of-63 (28.6 percent) on jump shots at LSU and in Sixers Summer League, and he’s often reluctant to let it fly. NBA defenses will sag off him, double-dog daring him to shoot, clogging the lane. Down the line, Simmons could turn into a perfectly competent shooter. But the outlook now is bleak. Simmons has a major problem in a league where shooting and spacing are paramount to success.

The Sixers needed a player who could offset Simmons’s weakness by providing another source of playmaking while also offering spot-up shooting ability and versatile defense. Fultz does all of that in ways no player available at the third slot could; that’s why losing one of their two valuable future firsts is worth it.

Fultz and Simmons will need to learn to share. Simmons will frequently be the lead ball handler. Just hear out Sixers head coach Brett Brown. “When I say ‘point guard,’ I mean ‘point guard,’” Brown said in April on The Vertical Podcast With Woj when asked about Simmons’s role. “You know, who takes the ball out of bounds, who receives the ball when the ball goes in the basket, who brings it up the floor after a free throw. … He’s got a quality that he wants the ball and he loves to pass. And so we’re gonna persevere, and see where this plays out.”

The Sixers fan reaction to the trade has been jubilant. Colangelo might’ve gotten off to a bumpy start in his relationship with the Process Trusters, but he’s made three sound picks in Simmons, Furkan Korkmaz, and Timothe Luwawu-Cabarrot; didn’t make any rash decisions in free agency; and at least got something for Nerlens Noel. Colangelo is not a perfect general manager. He’s even admitted that at one point, he felt he wasn’t the guy for the job. The ghost of Hinkie will always hover over the Sixers regime. But Colangelo has, so far, made mostly the right choices. Colangelo wasn’t the starter, but he can be the finisher.