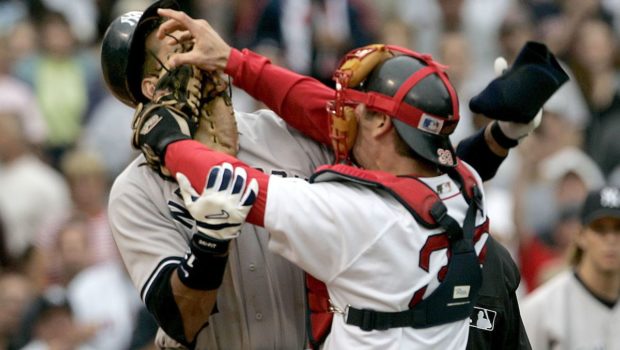 You have to wonder of there is something in the water in and around Boston that results in major league cheating:

First, the NFL Patriots with Spygate and Deflategate and now the Red Sox with Applegate!

According to a report from the New York Times, the Boston Red Sox have stolen signs from the Yankees and other teams in baseball, with an Apple Watch:

Investigators for Major League Baseball have determined that the Boston Red Sox, who are in first place in the American League East and likely headed to the playoffs, executed a scheme to illicitly steal hand signals from opponents’ catchers in games against the second-place Yankees and other teams, according to several people briefed on the matter.

The baseball inquiry began about two weeks ago, after the Yankees’ general manager, Brian Cashman, filed a detailed complaint with the commissioner’s office that included video the Yankees shot of the Red Sox dugout during a three-game series in Boston last month.

The Yankees, who had long been suspicious of the Red Sox stealing catchers’ signs in Fenway Park, contended the video showed a member of the Red Sox training staff looking at his Apple Watch in the dugout and then relaying a message to players, who may have then been able to use the information to know the type of pitch that was going to be thrown, according to the people familiar with the case.

After an investigation into the matter, MLB determined the Yankees instinct was correct–and the Red Sox admitted that the act had been on for several weeks of the season.

Baseball investigators corroborated the Yankees’ claims based on video the commissioner’s office uses for instant replay and broadcasts, the people said. The commissioner’s office then confronted the Red Sox, who admitted that their trainers had received signals from video replay personnel and then relayed that information to some players — an operation that had been in place for at least several weeks.