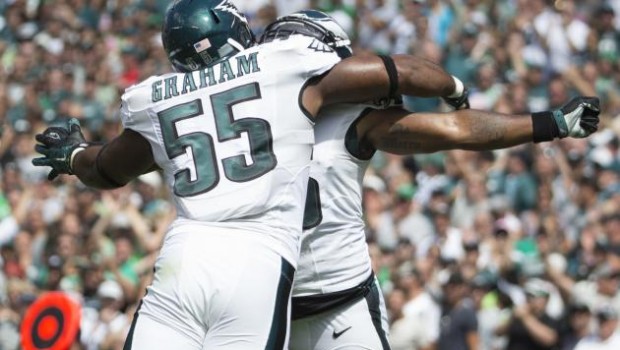 IS A LIGHTER BRANDON GRAHAM GOOD FOR THE EAGLES?

Considering that Brandon Graham had an awful and injured first two years with the Eagles after being drafted as their top pick in 2010, it’s amazing that we are still talking about him.

Graham signed a four-year contract extension during free agency. For the first time since he was selected 13th overall by the Eagles in 2010, he’ll be a fixture in the starting lineup.

How did Graham celebrate his big promotion? By going on a diet, apparently. The outside linebacker posted on his Instagram account (via Bleeding Green Nation) that he and his wife lost a combined 25 pounds over the offseason.

Theoretically, the weight loss could help Graham in the area he struggles most—dropping into coverage. It’s not that he isn’t usually in position, but keeping up and getting his body around to cover smaller backs and receivers in the flat has proven problematic at times.

Of course, the concern is whether Graham will lose any of the power that’s made him so effective at setting the edge and rushing the passer. Of course, if the drop in weight increases athleticism, any loss in that area could be negated.

Graham was listed at 265 pounds, for whatever that’s worth. One has to imagine he’s either playing closer to that weight or slightly less, but likely not a dramatic difference. Time will tell whether the change is merely cosmetic, or it results in a positive or negative impact on the field.