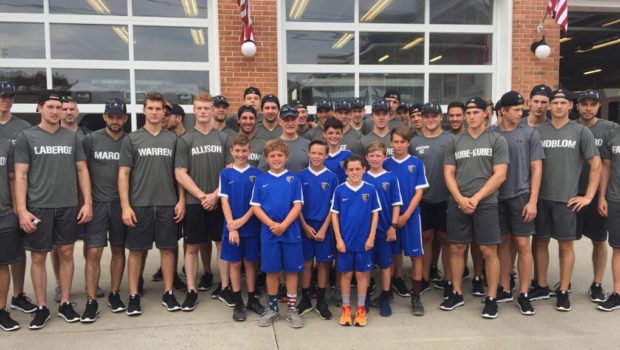 LIFE’S A BEACH! CHECK OUT THE FLYERS’ TRIAL ON THE ISLE!

Prospects began the beach day with a sand sculpture contest. They were given the option of designing a Flyers 50th anniversary logo or the team’s main logo.

“[We did] Awesome. Ten out of ten for us,” said defenseman Phil Myers, who built a Flyers logo with Carter Hart, Simon Loof, Wyatt Kalynuk and Matt Anderson. “It’s probably been about 12 years since I built something into the sand. I haven’t done that since I was a kid. It was a really fun time and it was a great to get to know the boys a little better.“

From there it was time to cool off, even though the overcast skies and ocean breeze made the temperature pretty comfortable. The squad locked arms with each other and walked into the water just past the breakers and sat in the surf together: