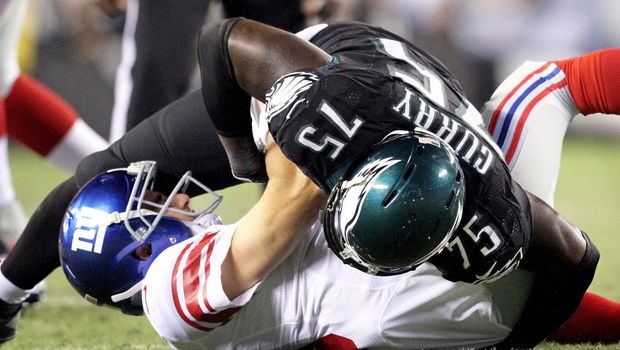 LICKING THEIR CHOPS! EAGLES’ DEFENSE WILL TEE OFF ON GIANT ELI!

The Eagles’ defense must be licking its chops:

They’ll be able to tee off on the New York Giants’ old and immobile quarterback Eli Manning this Sunday at MetLife!

A day after saying he wasn’t sure who would start, interim coach Steve Spagnuolo left no doubt that the two-time Super Bowl MVP would be his quarterback Sunday.

Spagnuolo was not sure whether Manning also would start the final two games, against Arizona and Washington. The Giants (2-11) might want to see what rookie Davis Webb can do; the third-round draft pick has not played this season.

“Right now I’m talking about I’m on the week by week and let’s win the next game,” Spagnuolo said. “To beat the Philadelphia Eagles right now, Eli Manning is the starting quarterback, and I don’t feel that changing, but I don’t know what next week is going to bring.”

Manning returned to the starting lineup on Sunday and hit 31 of 46 passes for 228 yards and a touchdown in a 30-10 loss to the Dallas Cowboys. He threw two late interceptions in a game that was tied 10-10 halfway through the fourth quarter. Both came after the Cowboys opened a 23-10 lead.

“I thought Eli played really good football, real solid,” Spagnuolo said. “Watched the film. Got us in and out of some things that probably only he can do because he’s pretty special that way. I’m sure he’ll tell you there’s a couple of throws he would like back, and that’s probably true of any game.”

“Always want to be out there and go see if we can go get a win,” said the 36-year-old QB who saw his streak of 210 consecutive starts snapped on Dec. 3 when he was benched by former coach Ben McAdoo against the Raiders in Oakland. The loss dropped the Giants to 2-10, and McAdoo and general manager Jerry Reese were fired the next day. Spagnuolo was elevated from defensive coordinator to interim coach.

Sunday was his first game running a team since being fired as St. Louis Rams coach in 2011, and he was extremely disappointed.

“Felt like we played 52 minutes of pretty good team football, and there’s enough mistakes in there, but certainly well enough to win,” he said. “We’re in a 10-10 game with a division opponent and it’s a dogfight, and then all of the sudden, it turned real quickly on us and it was tough to rebound.”

The Cowboys (7-6) scored three touchdowns in less than five minutes to stay in the playoff race. It was big-play football, something the Giants have lacked since losing receiver Odell Beckham Jr. in Week 5 against the Chargers.