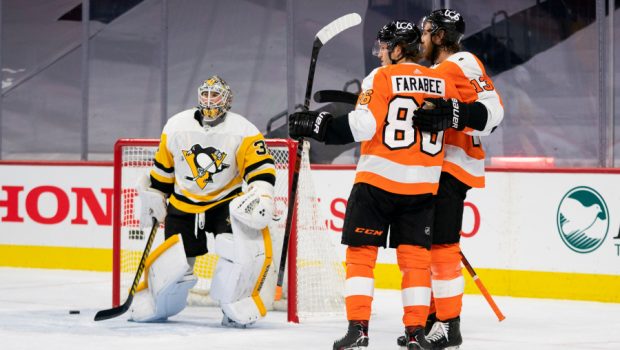 When the NHL reconfigured for this pandemic season, it anticipated red-hot regional rivalries.

Such as tonight’s Flyers-Pens game in Pitt, the first of three straight out west, ending Thursday and Saturday.

Approaching the midpoint of the season, the East Division fourth-place Flyers are two points ahead of the Penguins with two games in hand.

The Flyers, who have won three in a row, got a shutout apiece from goaltenders Brian Elliott and Carter Hart in sweeping the Sabres.

“We’re hard to play against right now, and I think that leads to our offense most of the time.”

Coach Alain Vigneault, who picked up his 700th career win Sunday, is going to count on defenseman Shayne Gostisbehere to help keep the Penguins frustrated on offense after he played on the top pairing with Ivan Provorov, often matched against Buffalo’s top line, and on the top power-play unit.