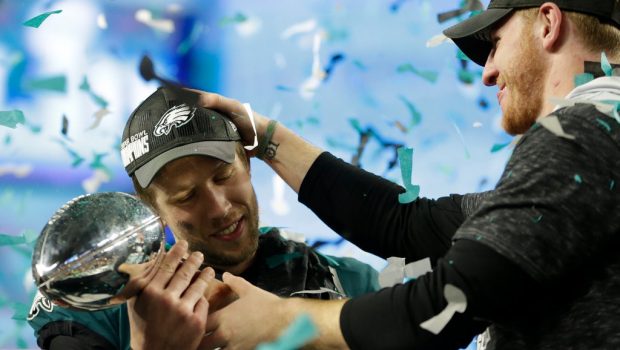 LET’S GET REAL: EAGLES DECISION TO START FOLES WAS A NO-BRAINER!

Starting quarterback Nick Foles in tonight’s Eagles opening game is not only the right decision, it was the only one!

Franchise QB Carson Wentz’s recovery from two ligament surgeries is ultimately the Eagles’ organization’s No. 1 priority. Wentz looks great in all drills almost exactly nine months after the operations, but the overall value Wentz represents to the football club can’t be ignored.

They are and should be treating him as the most irreplaceable member of this team. The potential number of years Wentz can be the trigger man as an MVP candidate and top tier quarterback in the NFL gives the Birds a legitimate chance to win more Super Bowls for years to come is not just conversation, but absolute fact!

Give him at least another month getting his legs under him and slowly integrate him back to full play after four games, and when the Doctor’s clear him for full contact, there is no hurry.

Not only has Foles performed tremendously in the playoffs last season going 3-0, including Super Bowl 52 victory, he was doubted then by the so called “experts” proving them all wrong being the underdogs in all three games and winning them straight up.

He’s being doubted again by the Philly media about whether he can keep winning games as Wentz replacement in a new season,

I see no reason why he can’t.