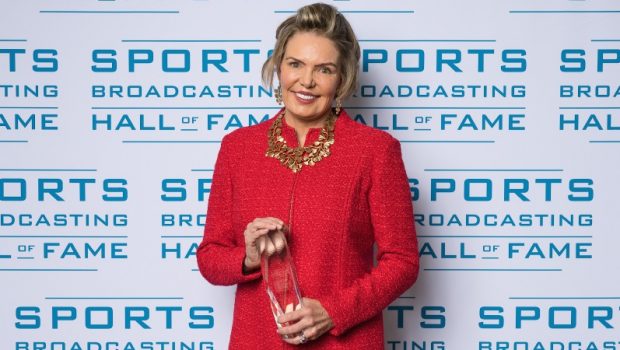 LESLEY VISSER DREAMED THINGS THAT NEVER WERE AND SAID WHY NOT

A surpassing sportswriter who became a star on the CBS air — the only woman in the Pro Football Hall of Fame —“V” joined the Boston Globe in 1974 and in 1976 she earned the New England Patriots’ beat at the ripe age of 23. She is in Philly this weekend to pick up a Vinci Award at the Vincera Institute’s Children’s Classic at Philly Country Club.

There’s no better sign that spring has sprung than the rash of fundraising events at Philly’s world-class golf tracks — from Stonewall to Merion to Aronimink.

The leader in the clubhouse, pardon the expression, is this weekend’s Vincera Children’s Classic at Philly Country Club, which raises money for the Vincera Foundation.

The Classic and the attendant Vinci Awards may not be as prestigious as the ESPYS, but the Worldwide Leader has been doing it for a lot longer.

He is the founding father of the surgery to repair muscle core injuries, which used to be called sports hernias.

And his Vincera Institute in the old Philly Navy Yard is where every world class athlete winds up to shore up his or her core.

Virtually every superstar in this sports-crazy town will receive a Vinci Sunday night before the next day’s golf:

Visser isn’t a Philly sports star or even from Philly.

But she definitely belongs in this firmament.

A surpassing sportswriter who became a star on the CBS air, “V” joined the Boston Globe in 1974 and in 1976 she earned the New England Patriots’ beat at the ripe age of 23.

If you don’t think that’s a steep hill to climb, you might consider that Ray Didinger, the Philly NFL gold standard, was given the Eagles beat at the age of 23 in 1970 for the late, great Bulletin. For him covering the team as a fair and balanced reporter was made all the more difficult because he succeeded a reporter who rarely criticized the Birds.

For Visser, her sex made the hurdle even higher in what was then an all boys club.

“My mother said to me when I was 10, ‘What do you want to do when you grow up?’ she recounts during a phone interview from her home in Florida.

“ ‘I want to be a sportswriter,’ young Lesley said.

“ ’Sometimes you have to cross when it says don’t walk,’” her mom advised. And that’s the title of Visser’s memoir:

“Sometimes You Have to Cross When It Says Don’t Walk: A Memoir of Breaking Barriers”

She has been doing that her entire life.

She is the only woman in the Pro Football Hall of Fame, right there with Ray Didinger.

Born in Boston, Visser and her family moved around a bit — Holland (the country, not the Bucks County town), Maryland, Cincinnati, then Palo Alto, where her dad worked at Stanford.

“I couldn’t get into Stanford,” she says. “So I went to Boston College because of the sports.”

BC is not only a fine academic institution, one of the most highly desired, especially by Catholic families, but it has a rich tradition for spawning journalists.

For instance, the great political writer and commentator, Martin F. Nolan, is a Double Eagle — BC High and BC — and he went on to run the Globe’s Washington bureau during Watergate, making Nixon’s enemy’s list in the process.

“Bob Ryan, Mike Lupica and I had the same favorite English professor, Paul Doherty,” Visser says, referring to Ryan, the Globe’s NBA writer for almost 50 years, and Lupica, the New York Daily News columnist. “It’s not an accident that we all pursued journalism.”
After scoring a Carnegie Foundation grant in 1973, she went to the Globe in the summer of ’74, joining either the greatest sports department in the USA or the second greatest after the Philly Daily News’ in the mid-1960s: Stan Hochman, George Kiseda, Sandy Grady, Jack Kiser and Jack McKinney. Or the Bulletin in the late-‘60s: Grady, Joe McGinniss, Kiseda, Bob Vetrone, Frank Brady and Frank Bilovsky.

Sports Illustrated deified it in a superheated 2009 bonus piece entitled:

Glory days of The Boston Globe: the greatest sports staff ever

It was October 21, 1975, and Lesley Visser, then a recent Boston College graduate, sat in the second row of a smoke-filled Fenway Park press box. Game 6 of the World Series between the Hub’s Red Sox and Cincinnati’s Big Red Machine unfurled on the field beneath, but she fixed her eyes on Ray Fitzgerald, the middle-aged man with the boxer’s nose and poet’s touch, one seat in front of her. Four days a week Visser read his lyric verses in the sports pages of The Boston Globe. On this night, she peered over his left shoulder to glimpse at an early edition.

By the time Bernie Carbo came to bat as a pinch-hitter in the bottom of the eighth with two out and two men on, the Sox, trailing 6-3 in the game and 3-2 in the series, faced elimination. The seemingly unhittable Luis (El Tiante) Tiant had been touched for six runs, and had left the game, too late, in the inning’s top half. Fitzgerald, a former minor league pitcher, was resigned to eulogizing another season. He began to type: You could feel it slipping away.

History tapped him on the shoulder before he could get any deeper. One of 35,205 bedside mourners, he watched the crowd jump to life as Carbo rocketed a 2-2 fastball into the centerfield seats, tying the game. Ripping the sheet from his typewriter, Fitzgerald let it fall to the floor. Like a groupie filching a lead singer’s playlist, Visser snatched the discarded lede. “Ray was a god to me,” she says.

Sox fans never read her deity’s doubts the next day. After Carlton Fisk hit the game-winning homer in the 12th, Fitzgerald changed tone:

How can there be a topper for what went on last night and early this morning in a ballyard gone mad, madder and maddest while watching well, the most exciting game of baseball I’ve ever seen.

The rest, as they say, is history.

And Visser has made a lot of it.

The Patriots beat wasn’t what it is now because the Pats were pretty bad — though they quickly improved from 3-11 to 11-3 with V on the beat.

Timing is everything, and the time was perfect for an explosion of interest in college basketball when the Big East and ESPN were born in the same year, 1979.

Visser made her national bones with her Globe coverage of the 1978-79 Boston College basketball point-shaving scandal.

A few features for CBS led to a part-time network gig and then full-time in 1987. When CBS lost its NFL rights to Fox in 1993, Visser was hired by ABC and ESPN, returning to CBS in 2000.

“I always got great assignments,” she says, and I was never economically or sexually harassed.

“And I owe my career to four men — sports editor Vince Doria at the Globe, CBS producer Ted Shaker and Sean McManus and Les Moonves at CBS. A lot of women only last three years, and when they turned 40 they left CBS. But Sean and Les kept re-upping me”

So, sports has been very, very good to Lesley Visser.

She met her first husband, Philly native Dick Stockton, at that game 6 of the ’75 World Series (“There it goes, a long drive, if it stays fair …” was his memorable call of Carlton Fisk’s game-winning homer). And she was introduced to her second husband, Bob Kanuth — an investment banker who captained the 1969 Harvard basketball team — by Rick Pitino at the Kentucky Derby.

“I used to come to Philly a lot on the Madden Cruiser [John Madden’s transportation mode because he hated to fly], and it never offended me when Eagles fans got loud, especially at the Vet … used to love Pat’s, walking around Society Hill, Bookbinder’s.

“One of my first big events was the Final Four in 1981 at the Spectrum. President Reagan had been shot and I remember interviewing Dick Ebersol, Bryant Gumbel and Dick Enberg, the NBC guys, who weren’t sure if the game would be played that night.”

The President pulled through, and so did Indiana, which beat North Carolina.”

Bill Meyers is from the Boston area, went to Harvard and interned at the Globe, but Visser isn’t being honored because of a Boston connection.

“Lesley’s courage and determination led to her long history of breaking down barriers and trailblazing in broadcasting,” Meyers said. “She set a standard of excellence that paved the way for women in sports broadcasting and that set a new standard for men and women. We are honored to present The Vinci award to Ms. Visser.”

Lots of other Bostonians will be in Philly this weekend for Sixers-Celtics series, which may be a coincidence. So if you run into V, take a chance and say hello.

As Visser has proven, sometimes you have to cross when it says don’t walk.