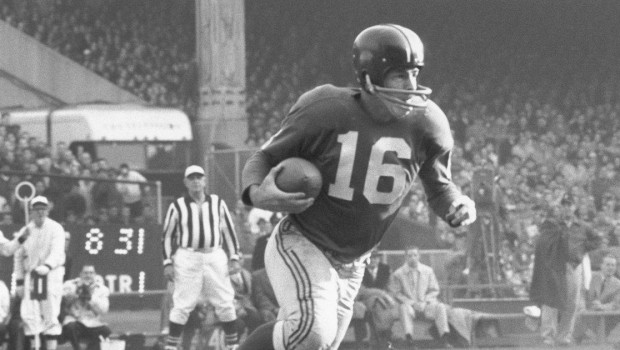 One of the greatest players in NFL history has passed away.

One of the most versatile and iconic players in football history, Gifford earned the NFL’s Most Valuable Player award in 1956 when he led the Giants to their fourth NFL championship.

In 12 NFL seasons, Gifford made the Pro Bowl eight times at three different positions (defensive back, halfback and wide receiver) just as position specialization was taking over the game.

The Giants would go on to appear in the championship game five more times before Gifford retired in 1964, marking the most glamorous era in franchise history.

New York was at the epicenter of professional sports activity in the 1950s, with the Giants joining baseball’s Yankees and Dodgers as the most celebrated teams of the decade.

Those legendary Giants squads featured not only Gifford, but also Hall of Fame coaches Vince Lombardi and Tom Landry as offensive and defensive coordinator, respectively.

Gifford’s career was put on 18-month hiatus following a devastating hit from Hall of Fame linebacker Chuck Bednarik in 1960. Gifford returned to go out on his own terms, recapturing Pro Bowl form in 1962.

Gifford’s legacy goes beyond the gridiron. Blessed with matinee idol looks in the world’s most dynamic city at the time, Gifford was a celebrity on par with Hollywood’s A-list stars.

Frederick Exley’s 1968 cult classic fictional memoir, A Fan’s Notes, centered on the writer’s fascination with Gifford’s “gift for living out his dreams.”

Shortly after the release of Exley’s book — “unmatched in American literature,” per critic Jonathan Yardley, for it’s use of football — Gifford went on to a successful second career as a broadcaster.

Gifford replaced Keith Jackson as the play-by-play announcer on ABC’s Monday Night Football, teaming with Howard Cosell and Don Meredith as the most renowned broadcasting trio in NFL history.