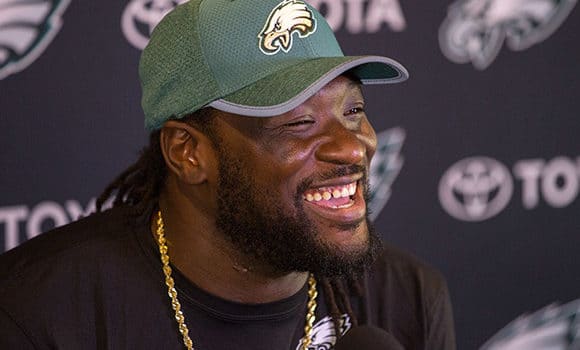 The Eagles are 7-1 and everybody is having a good time.

Perhaps no one more than running back LeGarrette Blount:

“I’ve been a part of a couple special locker rooms, each in different ways,” he said after Sunday’s win over the Niners. “These guys right here, you can tell they’re extremely hungry for success and for wins, and you have to keep that mentality if you want to be successful.

“I think everybody on the team has handled (success) pretty well from the top to the bottom, starting from (owner Jeffrey) Lurie to (head coach) Doug (Pederson) to the assistant coaches, (running backs coach) Duce (Staley) and Stout (offensive line coach Jeff Stoutland), all the way down to us. I think we’ve handled it well,” Blount said after the game.

“We know what it takes to win. We know that it’s a grind,” Blount said. “We go back to work every single day knowing that we have to put everything we have into that day throughout the week to know we will have a chance on Sunday.