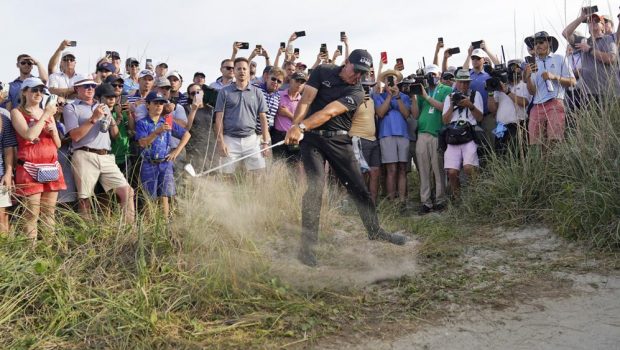 Phil Mickelson lost a five-shot lead in a span of five holes on the back nine but held on to the lead and he is within today’s 18 holes at the PGA championship in Kiawah.

One tee shot into the water, another that ended up under a cart tire. It was all part of a wildly entertaining day that ended with Mickelson nearly holing a flop shot that can test the nerves of just about any 50-year-old but him.

That brought Mickelson to the cusp of history not many could have seen coming.

That par save for a 2-under 70 gave him a one-shot lead over Brooks Koepka and left him 18 holes away from becoming the oldest champion in the 161 years of the majors.

When he curled in the 4-foot putt for par on the 18th hole, Mickelson became the oldest player with a 54-hole lead in a major since 59-year-old Tom Watson at Turnberry in 2009.

That didn’t end well for Watson, who lost that British Open in a playoff to Stewart Cink. For Mickelson, it’s an opportunity to become the oldest major champion. Julius Boros was 48 when he won the 1968 PGA Championship.