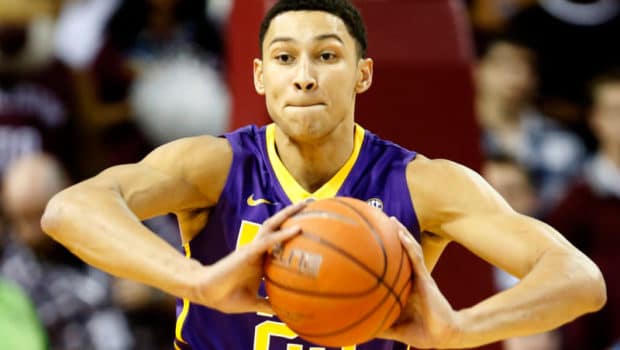 LEBRON JAMES IS LOVING HIM SOME SIXERS’ FAVE BEN SIMMONS!

LeBron James has described himself as Ben Simmons’ big brother and mentor, but the NBA star says the Australian teenager controls his own destiny.

Simmons, 19, is expected to be selected No.1 by the Sixers at next Thursday’s NBA draft in New York.

James’ management agency, Klutch Sports Group, represents Simmons and the teenager has based himself in Cleveland ahead of the draft.

“As a mentor to him, as a big brother to him, I also give him a lot of advice on what to expect when he makes his jump next week and how to handle it,” James said.

“But he also has to figure out on his own as well because everybody’s path is different.”

Simmons has been the frontrunner for more than a year to be the No.1 draft pick, despite being unable to lead Louisiana State University to the NCAA Tournament.

When asked if he thought the 76ers would be wrong not to select Simmons first, James said he was not an NBA general manager so declined to answer.

“I don’t get paid by the Sixers, so I’m not going to answer that.”

But James was bullish not only on the Melbourne-born, Simmons’ talent and skills, but his personality.

“I think he is a great young talent,” James said.

“I think what he displays on the basketball court, we all notice.

“I think we all don’t know just yet how great a kid he is and how down to earth he is with the game of basketball and life in general.”

As for just how much of an impact Simmons would make on the NBA, James said history would show.

Simmons’ father, US-born former NBL star Dave Simmons and mother Julie, have been in the U. S. with their son.

“I’ve had an opportunity to spend a lot of time over the last couple of years with him and his family and they’re just very appreciative of the opportunity they have been given as a family,” James said.