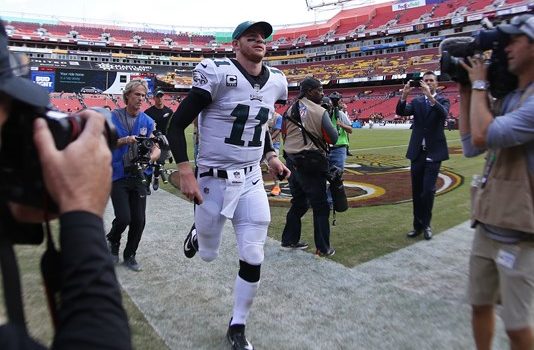 LEAVE IT TO SPORTS ILLUSTRATED TO FIND A CYNICAL EAGLES FAN TO PISS ON CARSON WENTZ’ PARADE!

The rest of the country got a dose of the Wentz-mania on Monday night when Carson led the Eagles past the Redskins, writes Andrew Perloff, whose theory is as boring as his writing:

As a Philadelphia native, I’ve been hearing it all season from my father and old friends. The chatter goes way beyond praise. Wentz represents hope. A chance to reverse years of bad luck and finally capture the Lombardi Trophy. And my friends have no sense of caution. Jerseys have been purchased. Greatest quarterback in franchise history debates are raging. Discussions about Minneapolis hotel rooms in February have begun.

It’s all so sad. Eagles fans will never learn. We’re the Charlie Browns of the NFL … always believing things are going to work out until fate pulls the ball out at the last second, leaving us flat on our backs wondering what happened: