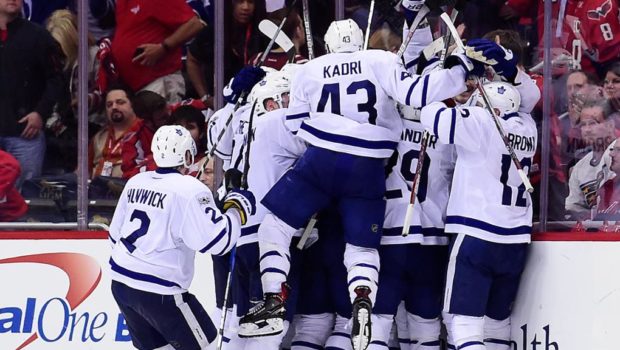 Check out the Stanley Cup scoreboard:

After scoring two goals, including a double-overtime playoff game-winner yesterday, Kasperi Kapanen is ready for more..

“I’ve got a lot of energy for sure,” the Toronto Maple Leafs forward told NHL.com. “Two big goals, and I think our team played really well today. We deserved to win, and I’m just really happy about the outcome.”

Kapanen scored 11:53 into the second overtime to give the Maple Leafs a 4-3 win against the Washington Capitals in Game 2 of the Eastern Conference First Round at Verizon Center. The best-of-7 series is tied 1-1 with Game 3 at Toronto on Monday.

Kapanen took a backhand pass from Brian Boyle from behind the net and scored into the left side with goalie Braden Holtby moving to the opposite side.

“I think one of their [defensemen] lost their stick there and I was yelling for [the puck],” Kapanen said. “There was a clear lane there, and [Boyle] made an amazing pass, so I got to put it in the empty net.”

Capitals forward Nicklas Backstrom tied the game 3-3 with 7:21 left in the third period. Alex Ovechkin and John Carlson scored for Washington, who won Game 1 4-3 on Thursday on an overtime goal by Tom Wilson.