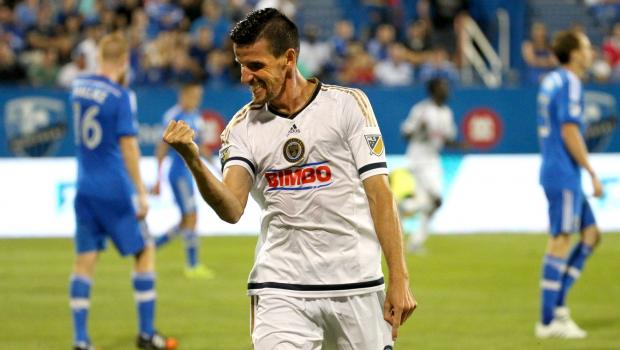 August 22 is a bit early in the season to consider an MLS game of vital importance.

But if you are the Union and you are trying to keep your playoff hopes alive, Saturday night’s 1-0 victory at Montreal was just that.

Sebastien Le Toux scored the game’s lone goal as the Union spoiled the MLS debut of Didier Drogba in a 1-0 win. The result pushed the Union just one point behind Montreal for that final playoff spot.

“We’ve had a lot of inconsistencies, either a clean sheet or giving up three goals,” Curtin said about his team’s road performances. “Not what I want. This was something to build on. Our last two road performances, Orlando and this one, I’m very happy with them. The defensive organization, guys doing all the dirty running, and our forwards setting the line.”

The Union defense has now posted consecutive clean sheets on the road for the first time since Aug. 17, 2013 and for only the third time in club history. They’ve kept the host team scoreless for 191 consecutive minutes, slightly behind the team record of 266 set in 2011.

Andre Blake made four saves and picked up his first MLS clean sheet and victory. He wasn’t called upon to make the highlight-reel save, but he controlled his rebounds and claimed the few crosses he needed to.

“We gave up four shots on goal and Andre did a great job being clean with them,” Curtin said. “It’s a huge confidence builder for him because it’s been a while, with the two knee injuries, for him to get a look. He’s been very patient and I thought he deserved an opportunity and he stepped up and kept a clean sheet. I’m very happy with that and hopefully we can ride that momentum now.”

For the Union, it’s actually their seventh clean sheet of the year – tied for seventh in MLS and just four behind Portland for the lead league. Consistency, though, is the key.

“It’s huge. It’s becoming our foundation,” Michael Lahoud said on keeping Montreal off the scoreboard. “Especially on a night like tonight, our goal was to put a professional performance, manage the first 15 minutes, especially with Didier Drogba making his debut. We enjoyed playing the party spoilers.”

But, as Curtin has alluded to all week, a draw would not be good enough. Thus, the clean sheet would only matter if the Union could grab a goal. They did so in the 78th minute when Le Toux cleaned up a loose ball in front of the net for the lead.

The play started with C.J. Sapong taking a ball wide and toward the end line before crossing in for Eric Ayuk. The 18-year-old rookie, who had just come on as a substitute, one-touched but his attempt went right to Le Toux who was standing inside the 6-yard box. The veteran then easily slotted it past Evan Bush for his sixth goal of the season.

“We want to win. We’re in a spot in the year where every point matters,” Curtin said. “We don’t like where we are in the table and there’s always pressure in this league to get results. I think we’ll enjoy these three points but we’ve got New England who’s in very good form coming in to our building, which should be tough.”

The Union will take on New England Saturday night at PPL Park with kick slated for 7 p.m. The Revolution currently sit seven points ahead of Philadelphia and are in fifth place in the Eastern Conference.