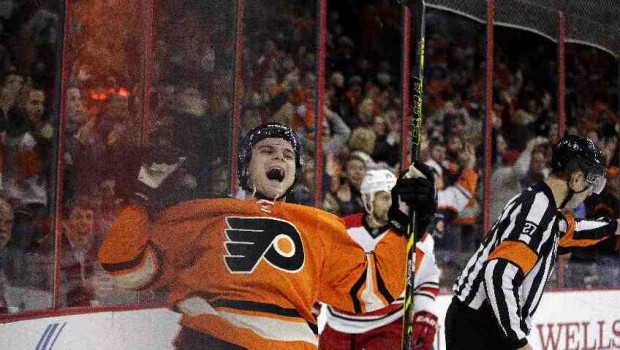 LAUGHTON SCORES, GETS ASSIST IN FLYERS’ 5-1 WIN OVER CAROLINA

Scott Laughton, showing off for his parents who were visiting from Canada, scored his first NHL goal and had an assist in the Flyers’ 5-1 win against the Carolina Hurricanes on Saturday.

Wayne Simmonds and Jakub Voracek had a goal and an assist each, and Sean Couturier and Michael Raffl each had a goal for Philly (11-13-5). Steve Mason made 25 saves, including 11 in the third period. The Flyers won their second straight game and snapped a four-game losing streak against Carolina.

The five goals are tied for the most the Flyers have scored in regulation this season, matching a 5-3 win against the Pittsburgh Penguins on Oct. 22. Their season high is a 6-5 overtime win at the Dallas Stars on Oct. 18.

Eric Staal scored for the Hurricanes, and Anton Khudobin allowed five goals on 23 shots. The Hurricanes (8-18-3) lost their fifth straight game; they’ve scored one goal in each.

The Flyers were leading 2-1 early in the second when they scored three goals in a 5:11 span.

Voracek started the run when he finished a tic-tac-toe passing play with Claude Giroux and Simmonds for a power-play goal at 4:54.

Laughton took a pass from Brayden Schenn on the move on the right side of the Carolina zone. He cut to the net and shot the puck past Khudobin’s blocker, off the left post and in at 7:29.

“Definitely a big relief,” Laughton said. “… When you go 17 or 18 games without scoring a goal it weighs on you a little bit. I tried to stick to what I do and I knew it would come eventually.”

Laughton’s teammates certainly were happy for him.

“Doesn’t happen very often you get your first one,” Mason said. “I’m still waiting for mine.”

Laughton has one goal and three assists since being recalled from Lehigh Valley of the American Hockey League on Nov. 18. More than that, he’s given the locker room a jolt with his youthful enthusiasm.

“I think he’s brought a great deal of energy,” Mason said. “He’s been working extremely hard. He looks fresh. He’s one of the best skaters I’ve seen out there; he looks like he’s flying. … He looks real fresh out there. He’s got the young legs. He realizes he’s got an opportunity right now and he’s making the most of it. It’s nice to see him have a little bit of success.”

Laughton has taken over as the second-line center between Schenn and Simmonds. Laughton also has seen time on the second power-play unit and on the penalty kill.

“He brings a lot to the table,” Simmonds said. “He plays a 200-foot game. He’s strong offensively and defensively. He makes really smart plays. He doesn’t try to play outside his boundaries. He’s a really smart player.”

To stay in the lineup, coach Craig Berube said he’ll have to keep seeing more of the same from the 20-year-old.

“When we called him up at the time, I wasn’t sure … I don’t think anyone was sure,” Berube said. “He was playing well down in the minors [but] it’s a different game up here. He’s obviously so far proved to us that he belongs here and he’s doing a good job. He has to continue to work, continue to learn. His work ethic has to be there every shift, every game.”