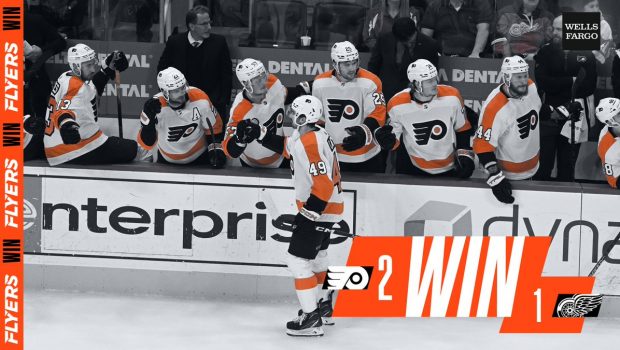 Scott Laughton snapped a scoreless tie midway through the third period and the Flyers defeated the Red Wings 2-1.

Noah Cates also scored for the Flyers, who are 9-3 in their last 12 games, and goalie Carter Hart stopped 30 shots.

“It was a close-checking game without a lot of chances, so I liked the way we kept our patience until we got a couple,” Flyers coach John Tortorella said.

“We stayed with it and we waited for opportunities.”

Hart saved his best save for last. With three seconds to play, a loose puck landed on Raymond’s stick on the edge of the Philadelphia goal crease. He snapped a low shot toward the net, but Hart slid his right pad across to kick the puck off the goal line.

“How did that puck not go in?” Red Wings coach Derek Lalonde said. “Not only did he get a pad on it, he flexed his pad to keep it out. That was pretty impressive by the Hart kid.”

The win improved Philadelphia to 20–20-7 on the season. With 47 points, the Flyers moved one point ahead of the Red Wings (19-18-8) in the Eastern Conference standings. However, Philadelphia still remains six points out of the playoffs.

“We knew it was 0-0 on the road and we had a chance to get two points,” Laughton said. After the Chicago game (a 4-1 Flyers loss in their previous game), we knew we needed this to get on a roll going into the All-Star game.”

Laughton scored first at 9:01 of the third period with his 12th goal of the season. Flyers center Kevin Hayes passed the puck to Laughton as he was splitting the Detroit defense. Breaking into the clear, Laughton lifted a backhand shot over the glove of Red Wings goalie Ville Husso.

Cates added the second Flyers goal at 13:23 of the final period, converting Travis Konecny’s pass for his sixth of the season.