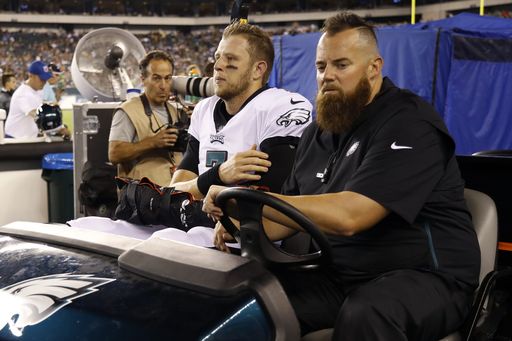 Eagles backup quarterback Nate Sudfeld will undergo surgery this morning on his broken wrist, and coach Doug Pederson says the injury is not season-ending.

Pederson said the Eagles would not bring in a quarterback right away, giving Cody Kessler a chance to win the backup job to Carson Wentz.

Clayton Thorson also is on the roster at the position.

“I can come out of retirement,” Pederson joked.

Wentz did not play last night.

Sudfeld went 10-for-18 for 177 yards and one touchdown before his injury. His touchdown pass was a 75-yarder to Marken Michel.

Sudfeld was injured on a late hit with 15 seconds left in the first half. He braced himself with both wrists as he fell backward onto the turf. Isaiah Mack was penalized 15 yards for roughing the passer.