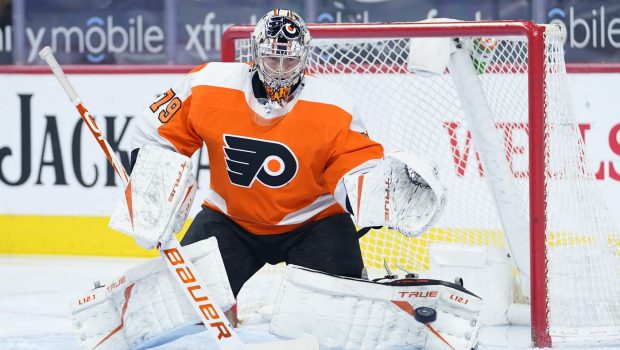 ‘LAST YEAR IS IN THE PAST,’ FLYERS HART SAYS — SURE HOPE SO!

The Flyers are in camp, and they have a lot riding on goalie Carter Hart, whose 2020-21 performance can charitably be described as woeful.

After a summer of rigorous training, the 22-year-old netminder expects a return to form from his first two seasons.

“I just worked on my game,” he said of his summer back home in the Edmonton area. “Just get bigger, faster, stronger. I feel good, ready to go.”

Getting Hart back to the top of his game starts with better defense in front of him.

Coach Alain Vigneault likes what he sees so far from Hart.

“I like his demeanor,” Vigneault said. “He’s smiling. He does look bigger, real fit. The fact that he was able to have a normal summer of training, it was a real good summer for him. I think it will really help him moving forward.”

Giroux said he senses a goaltender who’s more sure of himself.