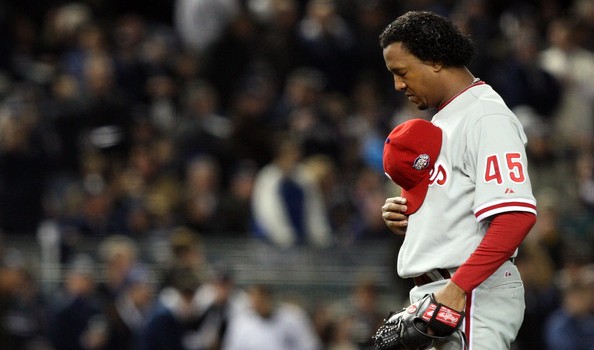 The great hurler was elected to the Hall of Fame yesterday, and he will undoubtedly go in as a Boston Red Sox, since Fenway is where he had his greatest years. But in 2009 he joined the defending World Series champion Phillies and made a real contribution — until manager Charlie Manuel gave him the ball for game 6 of the Series against the Yankees on only five days rest!

He took the mound for the biggest game of the season with a repertoire of pitches better suited for a junkyard, not the World Series. That Pedro Martinez was able to finish four innings against the Yankees was somewhat of an accomplishment.

But the Phillies needed much more than that. Pitching against the team he so loves to face, Martinez allowed four runs, then watched as the Yankees finished off their championship run with a 7-3 victory.

Martinez left the clubhouse before reporters were allowed in. Chased down in a hallway, he had little to say.

Much was made before the game of the Yankees starting Andy Pettitte on three days’ rest. But stamina was far more of an issue for Martinez. The slender righthander made his final start of the regular season on 10 days’ rest. His first two starts of the postseason came after rests of 15 and 12 days, respectively.

This time the Phillies asked Martinez to pitch after five days off following the six innings he threw in Game 2. It appeared to be too much for him.

Of the 77 pitches Martinez threw, only 26 were fastballs and not one was better than 89 miles per hour. Martinez tried to compensate with a steady flow of changeups and occasional sliders, but the better hitters weren’t biting. The good curveball he had against the Yankees in Game 2 never appeared.

Phillies catcher Carlos Ruiz said Martinez tried everything he had, to no avail.

“He just didn’t have that fastball,’’ Ruiz said. “He battled them as best he could but that is a great lineup.’’

Martinez could not fool Series MVP Hideki Matsui with his mediocre offerings. Matsui waited on that not-so-fast fastball and pulled a home run down the right-field line in the second inning. He crunched the same pitch for a two-run single with two outs in the fourth inning.

Matsui is 4 for 28 with one RBI against Martinez in regular-season games. But something changes in the postseason, as Matsui is 9 for 19 with two homers and six RBIs against Martinez. It was Matsui who gave the Yankees the lead in Game 2 with a solo home run in the sixth inning.

Manuel said he was not ready to go to his bullpen at that point in the game.

Martinez pitched a perfect fourth inning. But with the top of the Yankees’ order coming up in the fifth inning, Manuel went to Chad Durbin. That backfired as the Yankees scored three more runs.

Martinez said afterward he was having trouble breathing in the cold weather.

“He didn’t say anything about that,’’ Manuel said.

The question now is whether we will see the 38-year-old Martinez pitch again. He signed with the Phillies in mid-July and will be a free agent once again.

Martinez hinted earlier in the World Series that only a title would send him into retirement. That goal went unfulfilled.

“I enjoyed it,’’ Martinez said before disappearing into the night.