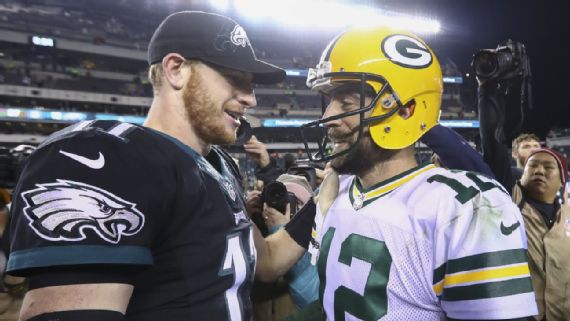 AT LAST, MNF DRAWS MORE THAN FLEAS WITH EAGLES-PACK GAME!

NFL execs, who have endured a season’s worth of bad pub about cratering TV ratings, are breathing a little easier.

The Packers’ win, which peaked at a 10.2 from 9:30-9:45 PM ET, was the first MNF telecast all season to score an increase over last year — much less hit a multi-year high. Keep in mind the comparable games both last year and in 2014 represented season-lows, setting the bar fairly low.

Monday’s 8.9 overnight ranks as the third-highest on ESPN this season, behind Pittsburgh/Washington in Week 1 and Giants/Vikings in Week 4 (9.1 for both games). The same overnight last year — for Chiefs/Packers in Week 3 — ranked 10th out of ESPN’s 17 telecasts.

ESPN’s telecast had a 17.4 rating in Milwaukee and a 13.8 in Philly. Coverage was simulcast on local affiliates in both markets, earning a 27.4 on Milwaukee ABC affiliate WISN and a 16.1 on Philly ABC affiliate WPVI. Norfolk, VA was the top neutral market (14.5), with Minneapolis-St. Paul (13.5) and Richmond, VA (13.2) rounding out the top five.