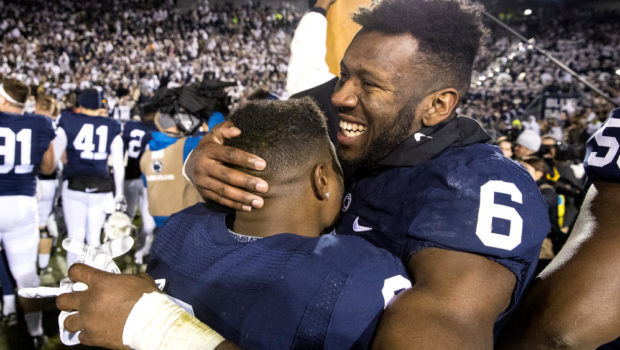 He watched his Penn State teammates mug for pictures with red roses, grin as they faced the bright lights of television cameras and eye the Rose Bowl’s 21-inch sterling silver trophy.

“To see where I started and to see where we’re ending with our last game in the Rose Bowl is surreal,” Golden (above) said.

The safety, along with offensive linemen Derek Dowrey and Brian Gaia, are the last three players left on Penn State’s roster who committed to play for the school when Joe Paterno was still the head coach.

They stayed with Penn State through the Jerry Sandusky child sexual-abuse scandal, Paterno’s abrupt dismissal after 46 seasons as head coach, crushing NCAA sanctions and a revolving door of coaches.

The trio will play in their final college game today against USC in the Rose Bowl, the last on-field link to a different era of Penn State football.

“You have the sense of being part of something bigger and something like this was the end goal,” said Gaia, who bounced from defensive tackle to guard to center during his career. “Everyone who stuck it out always had each other to fall back on. We all knew that something special was possible.”

But they couldn’t have anticipated the dark years of chaos and uncertainty to come when they committed to Penn State as high schoolers in 2011.

During a spring practice that year, Dowrey accidentally backed into Paterno.

“I almost stepped on him,” Dowrey said. “I turned around and there he is. It was like, ‘Oh, my gosh. This is the guy I’ve seen on television for years.’ ”

Dowrey was impressed the coach didn’t try to sell him on Penn State or talk football. Their first conversation was about Paterno’s wife, Sue, visiting the supermarket. Paterno didn’t mention football during a 45-minute meeting with Gaia and his family, either, and instead discussed his Italian heritage.

In August 2011, Golden was the final commitment. He remembered Paterno cracking jokes and appearing down to earth, sharp, genuine. Less than three months later, what Golden calls “the whole ordeal” started.

A grand jury indicted Sandusky, an assistant coach at Penn State from 1970 to 1999, on 40 counts of child sex abuse on Nov. 4, 2011. Five days later, Paterno announced he would retire at the end of the season. Penn State’s Board of Trustee’s fired him the same day. Thousands of Penn State students flooded the postcard downtown in State College, Pa., that night to protest the decision. They threw rocks, toppled streetlights, dodged clouds of tear gas and tipped over a television truck.

The unknown tugged at Dowrey that weekend as he and other recruits attended the Penn State-Nebraska game, the first after Paterno’s ouster. The coach died from lung cancer 2 1/2 months later.

“We were all up in the air,” Dowrey said. “(Assistant coach Bill) Kenney told me the same reasons that you committed to Penn State, those reasons are still going to be here. … It was ‘even if I get fired, this place is still special.’ ”

The trio was among 19 players who signed with Penn State and then-head coach Bill O’Brien in February 2012. Just five remain, including fellow fifth-year seniors Evan Schwan and Wendy Laurent. A sixth player, Nyeem Wartman-White, suffered a season-ending knee injury in September. The others transferred, quit, were kicked off or left for the NFL.

In July 2012, the NCAA fined Penn State $60 million, banned the school from bowl games for four years, vacated 112 victories and stripped 40 scholarships as part of wide-ranging sanctions for the Sandusky scandal.

“I was just a kid but in that moment it hit me all at once,” Dowrey said of a conversation with his father about the program’s future. “It was, ‘Wow, this is so up in the air right now. It was scary not knowing.’”

Golden visited other schools, but wasn’t tempted to leave: “(Penn State) is the end all, be all for me. That’s home.”

James Franklin, hired as the school’s head coach in 2014, called the the following years “one of the most challenging situations in the history of college football.”

The NCAA soon eased the penalties — dropping the bowl ban in 2014, reinstating the wins in 2015 and gradually restoring the scholarships. This season is Penn State’s first with the full complement of 85 scholarship players, though the team is one of the youngest in the country.

“For those (seniors) … to go from the darkest time in Penn State history to now having a chance to compete and possibly be a Rose Bowl champion in that final game, you see how things have changed,” redshirt sophomore quarterback Trace McSorley said. “It’s kind of a storybook ending.”

Golden, who earned a graduate degree in broadcast journalism two weeks ago, took in the scene in the ballroom not far from Dowrey and Gaia. Golden recalled playing for four different position coaches. The 2-2 start to this season. The challenges that seemed without end. 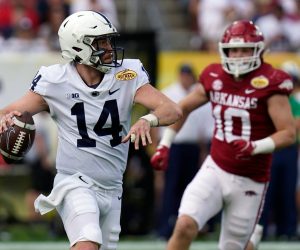 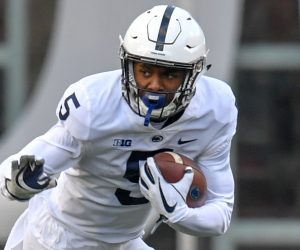 A PENN STATE WIN TODAY, MINUS DOTSON, WILL MAKE THE SEASON! 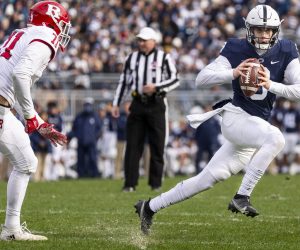