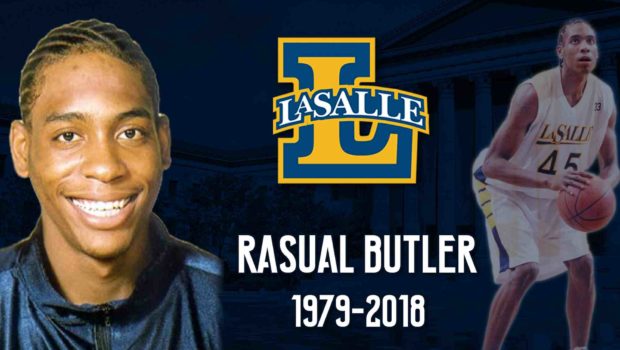 La Salle University and the Department of Athletics is deeply saddened by the tragic loss of former men’s basketball standout Rasual Butler, who passed away on Wednesday.

“This is a real tragedy to the La Salle community and to all who knew Rasual,” Director of Athletics Bill Bradshaw said. “He was a terrific basketball player, a great teammate and a wonderful person. Our thoughts and prayers go out to the friends and families of Rasual and his wife, Leah.”

A member of the Explorers from 1998-2002, Butler finished his collegiate career with a remarkable 2,125 points to rank fourth in school history behind former National Players of the Year Lionel Simmons, Tom Gola and Michael Brooks. A two-time First Team All-Atlantic 10 selection, Butler averaged 22.1 points per game as a junior to tie for the league lead in scoring.

As a senior, the 6-7 forward averaged 20.9 points and 9.0 rebounds and was named to the A-10’s All-Tournament Team after helping La Salle to a win over top-seeded Temple in the quarterfinals. He was inducted into the La Salle Hall of Athletes in 2008.

Following his senior year, the Philadelphia native and Roman Catholic High School product was drafted in the second round of the 2002 NBA Draft by the Miami Heat. He went on to a lengthy 13-year career that included stints with eight different franchises. He played in 809 games during his professional career, averaging 7.5 points and 2.4 rebounds per contest.